Biden has finished signing his first 15 executive orders and 2 executive agency directives, according to a White House pool reporter with the Washington Post.

Biden has finished signing the 15 executive orders and two agency directives, per a White House official.

These include orders for the US to rejoin the WHO, the Paris Accord, a commitment to racia equality, a federal mask “challenge” mandate. Taking only a couple of minutes to speak to reporters in the Oval, Biden listed the three orders he would sign first and answered a question about a letter he was left by his predecessor Donald Trump, calling it “very generous.”

Biden officially kicked off his one-day blitz of executive orders and executive actions, as expected, by signing them in front of an eager crowd of media, which has been following him around all day on his first day in office.

Biden kicked off the flurry of what are expected to be 17 or more individual executive action items by requiring masks on all federal grounds, while asking agencies to extend moratoriums on evictions and on federal student loan payments. He also signed an order overturning Trump’s travel ban order.

Another order asks Americans to don face coverings for 100 days while reviving a global health unit in the National Security Council that was allowed to go dormant during the Trump administration to oversee America’s pandemic preparedness and response. Biden will also begin to reverse steps taken by former President Trump to withdraw from the WHO by sending Dr. Fauci to speak at the international group’s executive board meeting on Thursday.

“As you’ve heard [Biden] say, the pandemic will continue to get worse before it gets better,” Jeff Zients, the incoming White House coronavirus czar, told reporters on a call previewing the administration’s actions. “This is clearly a national emergency and we will treat it as such.”

Biden also signed an EO to stop construction of border wall-work ordered under President Trump, even as Fox News reported that the contract with the construction company was already paid out.

Here’s a video from Sky News showing Biden as he starts the flurry of orders, with signings expected to continue until the first White House press briefing to be held at 1900ET.

The first requires people to wear face masks in federal buildings, the second dedicates economic support to "underserved communities" and the third sees the US rejoin the Paris Climate Accord.https://t.co/MoBTXLUniG pic.twitter.com/D0yof3MnbY

Here’s the schedule for the rest of the day after that:

With just hours to go before his swearing-in, Joe Biden and his team have already started Wednesday with a blitz of announcements for Executive Orders that will be issued immediately. 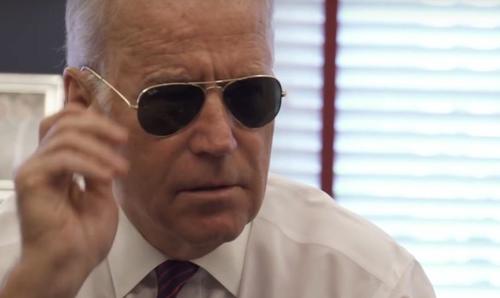 Following at least a week’s worth of media leaks teasing all the Biden “Day One” action items (Rejoin the Paris Accords, Keystone Pipeline, Halt the departure from the WTO, But mostly the massive immigration package that could create paths to citizenship for millions of illegal migrants), Biden is moving ahead with no fewer than 17 executive actions targeting Trump’s various policies.

CNN reports there will be a total of 17 executive actions, at least 15 of those will be executive orders targeting a range of issues, while Biden pushes his immigration package and a raft of immigration legislation. Of these 17 actions, 9 will involve reversals of Trump-era policies.

His very first action will an executive order mandating masks be worn by all on federal property.

And after holding a COVID victim’s memorial event on Tuesday evening, timed to maximally undermine Trump, who was at a private farewell ceremony at Joint Base Andrews

The FT reports that the barrage of orders also includes a “100-day masking challenge” to promote the wearing of face masks across the US, with a guest appearance by Dr. Anthony Fauci, who will (shocker of the century) serve as the media face of the challenge.

As expected, Biden will also roll back the Trump travel ban on citizens of certain Muslim -majority countries introduced at the very beginning of the Trump Administration, which survived a bitter court battle that infamously occupied plenty of headline space during the first half of 2017. It also sent protesters rushing to airports around the country as some travelers were caught up in the chaos.

“It was rooted in xenophobia and religious animus and president-elect Biden has been clear that we will not turn our back on our values with discriminatory bans on entry to the United States,” Jake Sullivan, Biden’s pick for national security adviser, said of the Muslim ban recently during a briefing.

Biden will sign the EOs and other memoranda in the Oval Office on Wednesday afternoon, his incoming press secretary Jen Psaki told reporters.

Psaki confirmed that, as we have previously reported, Biden plans to accompany his slate of EOs with a comprehensive immigration package that will be sent to Congress straightaway, where it will need to be passed by the (Democrat-controlled) House and Senate.

We have also noted previously that the day one orders will be part of a “10-day blitz” of orders, upon which we have previously reported, they will target the “four overlapping and compounding crises”: COVID-19, the economy, climate change and racial inequality.

“In his first 10 days in office, President-elect Biden will take decisive action to address these four crises, prevent other urgent and irreversible harms, and restore America’s place in the world,” Klain wrote at the time.

Other ’10-day blitz’ items include presidential directives on safely reopening schools and businesses, after Democrats spent much of last year insisting they remain closed.