Former President Donald Trump is preparing to resume MAGA rallies as early as May, according to CNN, and told podcast host Dan Bongino on Wednesday that he would wait until after the 2022 midterm races to announce whether he’ll run for president again.

According to CNN, Trump and his advisers have been in discussions to restart Make America Great Again (MAGA) rallies – where he’ll lambast his political enemies, including Alaska RHINO Lisa Murkowski (whom he’s vowed to travel to Alaska to campaign against), and presumably Maryland Gov. Larry Hogan – his ostensible GOP primary rival should he choose to run in 2024.

“This guy, I’ve been watching him, he’s a total loser. He hasn’t been a good governor,” said Trump, adding “I think he wants to run. I think I would give him less than a zero per cent chance, OK?”

As far as timing, Trump continued: “I think probably the most appropriate time would be right after the ’22 election, that’s my opinion. Could do it sooner, but I think right after the election would be good, especially if you have a good election.”

Bongino asked Trump how he’s enjoying life as a private citizen again, to which Trump pivoted back to politics – saying “It’s a different kind of life, but still very political because of the endorsements. Everyone comes and they all want the endorsement, more than they’ve ever wanted an endorsement. It’s never been an endorsement that’s meant so much, which is an honor to me.”

“It means victory,” he added. 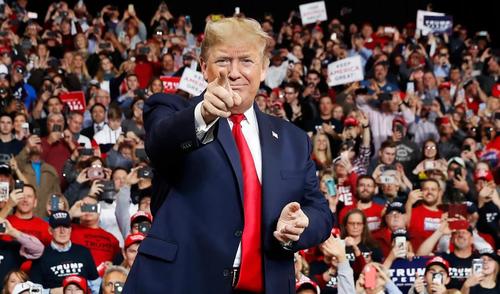 During the interview with Bongino, Trump repeatedly claimed he won the 2020 election. When asked if ‘good vaccine news’ might have swayed the election in his favor, Trump replied: “no, I won the election anyway. I ran two elections I won them both, as far as I’m concerned, and we’ll see about a third.”

Trump has spent most of his first nearly 100 days out of office golfing at his West Palm Beach golf course just down the street from his residence at Mar-a-Lago. On Mondays and Tuesdays, he discusses the week ahead with aides – including which GOP candidates he’ll meet with and consider endorsing.