Responding to the Oversight Board’s decision, former President Trump said in a statement:

“What Facebook, Twitter, and Google have done is a total disgrace and an embarrassment to our Country. Free Speech has been taken away from the President of the United States because the Radical Left Lunatics are afraid of the truth, but the truth will come out anyway, bigger and stronger than ever before.”

“The people of our country will not stand for it! These corrupt social media companies must pay a political price, and must never again be allowed to destroy and decimate our electoral process.”

The Board also found Facebook violated its own rules by imposing a suspension that was ‘indefinite.’ This penalty is not described in Facebook’s content policies. It has no clear criteria and gives Facebook total discretion on when to impose or lift it.

“Mr. Trump created an environment where a serious risk of violence was possible,” the oversight board continues, adding that “At the time of Mr. Trump’s posts, there was a clear, immediate risk of harm and his words of support for those involved in the riots legitimized their violent actions. As president, Mr. Trump had a high level of influence.”

“Given the seriousness of the violations and the ongoing risk of violence, Facebook was justified in suspending Mr. Trump’s accounts on January 6 and extending that suspension on January 7.”

The Board’s decision is accompanied by ‘evidence’ in the Trump case which catalogues the former president’s actions leading up to the January 6th ‘insurrection’ at the Capitol.

Elections are a crucial part of democracy. On January 6, 2021, during the counting of the 2020 electoral votes, a mob forcibly entered the Capitol Building in Washington, D.C. This violence threatened the constitutional process. Five people died and many more were injured during the violence. During these events, then-President Donald Trump posted two pieces of content.

At 4:21 pm Eastern Standard Time, as the riot continued, Mr. Trump posted a video on Facebook and Instagram:

I know your pain. I know you’re hurt. We had an election that was stolen from us. It was a landslide election, and everyone knows it, especially the other side, but you have to go home now. We have to have peace. We have to have law and order. We have to respect our great people in law and order. We don’t want anybody hurt. It’s a very tough period of time. There’s never been a time like this where such a thing happened, where they could take it away from all of us, from me, from you, from our country. This was a fraudulent election, but we can’t play into the hands of these people. We have to have peace. So go home. We love you. You’re very special. You’ve seen what happens. You see the way others are treated that are so bad and so evil. I know how you feel. But go home and go home in peace.

At 5:41 pm Eastern Standard Time, Facebook removed this post for violating its Community Standard on Dangerous Individuals and Organizations.

At 6:07 pm Eastern Standard Time, as police were securing the Capitol, Mr. Trump posted a written statement on Facebook:

These are the things and events that happen when a sacred landslide election victory is so unceremoniously viciously stripped away from great patriots who have been badly unfairly treated for so long. Go home with love in peace. Remember this day forever!

On January 7, after further reviewing Mr. Trump’s posts, his recent communications off Facebook, and additional information about the severity of the violence at the Capitol, Facebook extended the block “indefinitely and for at least the next two weeks until the peaceful transition of power is complete.”

The Board also said that Facebook must review the decision, which also applies to Instagram, within six months. Trump has nearly 60 million followers across both platforms. What’s more, “Facebook violated its own rules by imposing a suspension that was ‘indefinite.’” because “This penalty is not described in Facebook’s content policies.”

– didn't apply the First Amendment;
– isn't required to apply the 1A;
– is protected by the 1A; and
– reveals it is is made up of individuals who would probably scrap the 1A if given the chance.

Facebook responded to the decision, writing in a blog post: “Today, the Oversight Board upheld Facebook’s suspension of former US President Donald Trump’s Facebook and Instagram accounts. As we stated in January, we believe our decision was necessary and right, and we’re pleased the board has recognized that the unprecedented circumstances justified the exceptional measure we took.”

However, while the board has not required Facebook to immediately restore Mr. Trump’s accounts, it has not specified the appropriate duration of the penalty. Instead, the board criticized the open-ended nature of the suspension, calling it an “indeterminate and standardless penalty,” and insisted we review our response. We will now consider the board’s decision and determine an action that is clear and proportionate. In the meantime, Mr. Trump’s accounts remain suspended.

We thank the board for the care and attention it gave this case. –Facebook

The decision comes one day after Trump announced a new ‘platform’ called ‘From the desk of Donald J. Trump,‘ which allows him to post comments, images and videos. 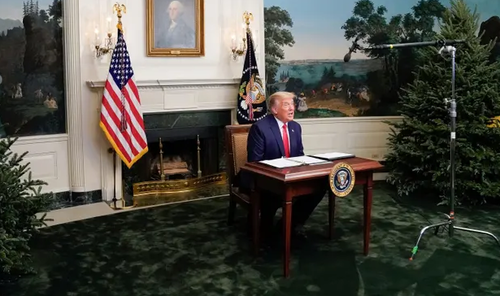 The tool is funded by Trump’s Save America and Make America Great Again political action committees.

“President Trump’s website is a great resource to find his latest statements and highlights from his first term in office, but this is not a new social media platform,” wrote senior Trump adviser Jason Miller, adding “We’ll have additional information coming on that front in the very near future.”

🚨President Trump’s website is a great resource to find his latest statements and highlights from his first term in office, but this is not a new social media platform. We’ll have additional information coming on that front in the very near future.🚨 https://t.co/m9ymmHofmI

The site, which was originally teased as something of a competitor to Twitter, received mockery across the board.