No need to fear a taper tantrum, they said. It’s all in the price, they said. Central banks have made it very clear what they are doing and there will be no surprises, they said.

Well, they – as usual – were full of shit, because moments ago this is what happened in Australia where the central bank unexpectedly did not offer to buy the April 2024 yield target bond: the yield on the 2Y bond just exploded, doubling in the matter of minutes from 25bps to 50bps as the central bank’s 0.1% yield curve control was summarily executed in broad daylight. 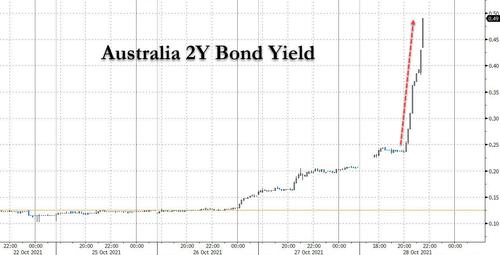 This was a VaR shock inducing, bond crushing 5-sigma move, and the biggest one day surge in 2Y yields since the Lehman crisis!

Heading into the Thursday session, markets were expecting the RBA to buy the April 2024 bond in order to contain the recent blow out in yields, which had moved far beyond the central bank’s official 0.1% YCC barrier in the past day. However, the central bank shocked traders when it decided against buying any of the target bond, telegraphing that its Yield Curve Control – at least on the short end – is now, for all intents and purposes, over .

Not only will the move fuel expectations for Governor Lowe to entertain the idea of an earlier rate hike, but it will reprice the entire short-end of the Australian yield curve, which will soon pancake in preparation for the coming inversion, which in turn will lead to shockwaves that will be felt in Europe and the US as soon as tomorrow, pouring even more fuel on the recent short-end fire that today sent the US 2Y above 50bps , and was at 0.52% at last check moments ago.

And before readers ask what comes next, here is the answer: the first 2s10s inversion is already out in the open courtesy of the Czech Republic whose curve just telegraphed an imminent recession. 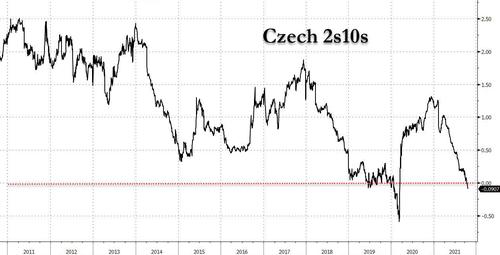 It’s the first of many.