Update (1717ET): House Speaker Nancy Pelosi’s misplaced confidence that she could pull off a Thursday vote on the $1.2 trillion infrastructure bill went up in flames, after Congressional Progressive Caucus leader Pramila Jayapal (D-WA) made clear that House leadership would not have enough votes from her group to pass it.

“Both bills pass together — and when the full legislative text of the popular Build Back Better Act is ready and agreed to, we’ll be thrilled to pass the President’s entire agena [sic],” Jayapal tweeted Thursday afternoon.

Progressives have been clear and consistent for MONTHS.

Both bills pass together — and when the full legislative text of the popular Build Back Better Act is ready and agreed to, we’ll be thrilled to pass the President’s entire agena.https://t.co/oC8XcpLAhX

“We’re going to be working all through the weekend” said Jayapal, striking an optimistic note on the social spending bill, adding “We’re going to get these two bills done.”

Jayapal’s comments followed a “great meeting” with Sen Kyrsten Sinema (D-AZ), one of two moderate Democrats who have insisted on a slimmed down Build Back Better bill, which started out at $3.5 trillion and now sits at $1.75, per the White House.

House progressives have too many “No” votes to pass the infrastructure package, according to Rep. Pramila Jayapal (D-WA), sentiment echoed by Rep. Ilhan Omar (D-MN).

Will Pelosi – who said she’d never hold a vote that won’t pass – cancel?

House Speaker Nancy Pelosi is about to test whether progressive Democrats are full of hot air over their threat to nuke the $1.2 trillion bipartisan infrastructure package unless it’s paired with the yet-to-be finalized social spending package – which the White House capped at $1.75 trillion earlier Thursday. 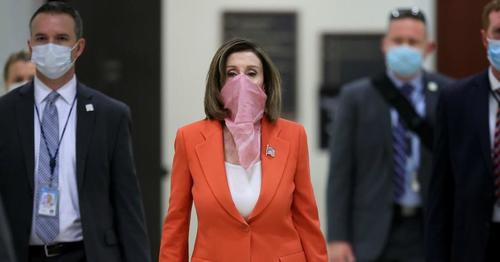 If House progressives cave and pass the infrastructure package without the already-gutted ‘Build Back Better’ Act, they’ll give up whatever leverage they thought they had (and obviously don’t) towards achieving their spending goals.

Biden, meanwhile, said on Thursday that “We badly need a vote on both of these measures,” adding “I don’t think it’s hyperbole to say that the House and Senate majorities and my presidency will be determined by what happens in the next week.”

According to The Hill, Pelosi insists she’s “going to hold the vote open until we get a majority,” which – at least as of last night, didn’t seem within the realm of possibility based on Wednesday night statements by House progressive leaders.

Rep. Pramila Jayapal (D-Wash.), the Congressional Progressive Caucus leader, planned to survey the 94 other members in her caucus but predicted that they’d need something more concrete than the White House framework.

“We have had a position of needing to see the legislative text and voting on both bills. And we’ll see where people are, but I think a lot of people are still in that place,” Jayapal told reporters after the meeting with Biden. –The Hill

“I’m still gonna be a ‘hell no’ [on infrastructure] unless I see both move,” said Rep. Rashida Tlaib (D-MI), a member of the progressive Squad, after the meeting.

I am not going to sell out my district for a bill that was written by the fossil fuel industry and championed by two Dem senators who bow down to Big Pharma & corporate polluters.

Yet, despite the above, Pelosi thinks she can convince House Democrats to give Biden a victory as he embarks on a Thursday trip to Europe where he will address the G20 and global climate summit in Glasgow.

“When the president gets off that plane we want him to have a vote of confidence from this Congress,” Pelosi reportedly said according to a source from the meeting.

“In order for us to have success, we must succeed today.”

Good luck with that…