Around 0200 ET Saturday morning, the Democratic-led House of Representatives passed the second-largest stimulus package of the pandemic that includes a $15 minimum wage hike.

Lawmakers passed the bill by a thin margin: 219-212, with two Democrats (Reps. Jared Golden (Maine) and Kurt Schrader (Ore.)) joining all Republicans in voting against it.

The bill’s passage comes as COVID-19 deaths top half a million, and more than ten million people have lost their jobs and are battling food and housing insecurities.

“The bill includes some big-ticket items that would deliver important relief to businesses, workers, and the broader economy. It includes $1,400 stimulus checks for those making up to $75,000, $400 expanded weekly unemployment insurance benefits through August 29, and billions of dollars for arenas such as schools, state and local governments, and restaurants. It also increases Affordable Care Act subsidies for low- and middle-income Americans and expands both the child tax credit and the earned income tax credit,” according to VOX.

The bill also includes a $15 minimum wage hike, despite a recent Senate parliamentarian’s ruling that the minimum wage increase cannot be included in the stimulus package.

Democrats are using budget reconciliation, which allows passage of some legislation with only 51 votes in the Senate, rather than the 60 if the opposition filibusters. The Dems have 51 votes if Vice President Kamala Harris is asked to vote upon a tie-breaking, which means Dems could push Biden’s agenda through.

However, the parliamentarian’s ruling underscores the bill’s fragility as it reaches the Senate – where it only takes one Dem to doom Biden’s rescue package.

Already, centralist Dems, such as Sen. Joe Manchin of West Virginia, have balked at the idea of increasing the minimum wage from $7.25 to $15 an hour.

Others, such as the more progressive wing of the party, like Vermont independent Bernie Sanders, have stood tall on their support to include the bill’s $15 minimum wage increase.

Bear in mind that Republicans have introduced their versions of bills to increase the minimum wage.

But, of course, Bernie and his progressive buddies won’t stand for anything less than $15!

Some economists are warning that the legislation is too ambitious and may spark unwanted inflation.

In response to this MMT madness in Washington – treasury yields violently rose this past week ahead of House’s stimulus vote. More money flooding the economy sets off alarm bells on inflation risk, conjuring dark images in the minds of traders of the 1970s when central banks struggled to contain rising prices, sort of like what’s happening today (read: Food Inflation Is The Best Predictor Of Bond Yields).

As readers found out last week, February saw a massive shift in the market’s perception of the Fed’s rate-hike trajectory… now pricing in more than 4 rate-hikes between 2022 and 2024…

Laying it all out for readers, additional rounds of stimulus could stoke inflationary fears that would continue to depress tech stocks. 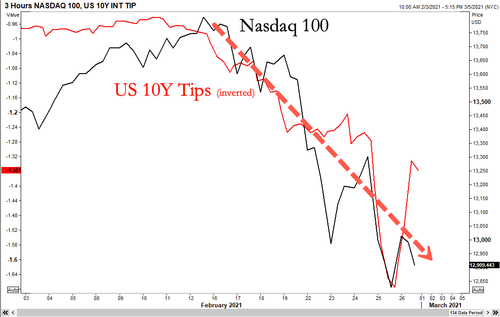 This is bad news for much of the Robinhood crowd who has yet to trade a rising rate environment.

So the question we ask: How long until the Fed intervenes to suppress rates? After all, other central banks this week freaked out with announcements of increased bond purchases to contain their sovereign yields from rising higher.

White House press secretary Jen Psaki and White House Chief of Staff Ron Klain have explicitly said that the Biden admin would not go against parliamentarian and use Harris. But given that Speaker of the US House of Representatives Nacy Pelosi went ahead with the bill, who knows…

Given Pelosi’s actions, this has the optics of a hot potato pass off to the senate… So Pelosi can remove herself from any blame should things not proceed smoothly. Now it is Senate Republicans that will be blamed (by the mainstream media) for Americans not getting their stimulus checks.