Georgia Secretary of State Brad Raffensperger (R) – who President Trump last Thursday called an “enemy of the people” for allegedly making some type of “deal” with Democratic operative Stacey Abrams over ballot harvesting – said on Monday that he’s suddenly concerned with progressive groups trying to sign up new voters in advance of a Jan. 5 Senate runoff which could flip the GOP-controlled chamber blue.

“These third-party groups have a responsibility to not encourage illegal voting. If they do so, they will be held responsible,” said Raffensperger, who added that his office is allegedly investigating efforts by America Votes, Vote Forward and the New Georgia Project to encourage people living outside Georgia to register to vote in the state.

Raffensperger also said his office has launched several investigations into accusations of fraud committed during the November election.

On Thursday, President Trump slammed Raffensperger – telling reporters: “You’re not allowed to harvest, but I understand the secretary of state, who is really an enemy of the people, the secretary of state, and whether he’s Republican or not, this man, what he’s done, supposedly he made a deal and you’ll have to check this, where she is allowed to harvest but in other areas they’re not allowed.”

JUST IN: President Trump calls GOP Georgia Secretary of State Brad Raffensperger the "enemy of the people" as he makes repeated false claims about the 2020 election. pic.twitter.com/1gjvZ4lMq3

Stacey Abrams – the failed GA gubernatorial candidate who failed to concede – has been credited with helping to register 800,000 people to vote in Georgia for the 2020 election, though she claims it wasn’t done through ballot harvesting, a process by which an individual will collect ballots from voters and turn them in.

Meanwhile, the odds of Democrats gaining control of the Senate are currently at 29% according to PredictIt. 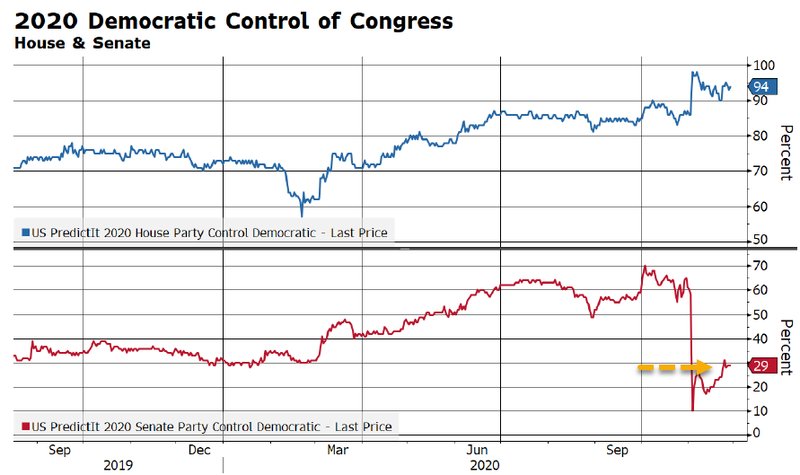 TRENDING: Bring Any Battery Back To Life. Car Companies “Hate” This