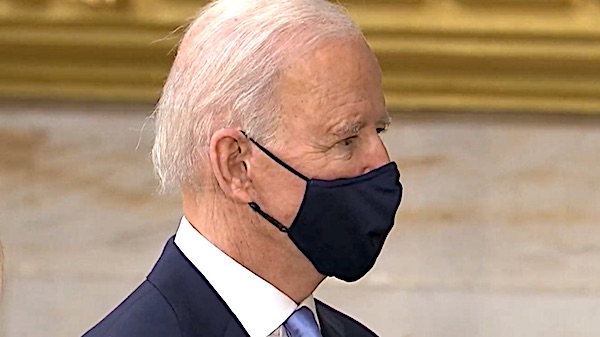 Don’t look now, but with President Trump out of the White House,  establishment media and some government leaders are signaling the coronavirus pandemic has dramatically turned a corner.

Already, as WND reported, the World Health Organization has officially acknowledged that the “gold standard” PCR test used to diagnose COVID-19 has a high rate of false-positives that make it unreliable, meaning the number of cases has been overstated.

Blaze TV host Steve Deace, who compiled a list on Facebook of developments this week, pointed out that the narrative NPR published on the day before the inauguration conflicted with its assessment the day after.

In fact, a New York Times chart tracking cases and deaths indicated the surge peaked before Trump left office, with a 21% decline in cases since Jan. 9.

“The pause has worked,” Whitmer said of the “three week pause” she announced 13 weeks ago in November.

Whitmer will allow restaurants to operate only at 25% capacity, however, and stadiums can seat up to 500 people. Tables must be six feet apart with no more than six people per table, and restaurants and bars will be ordered to close at 10 p.m.

President Biden’s COVID-19 tactics includes ramping up vaccinations and testing, and increasing the use of masks.

But after basing his campaign on Trump’s handling of the pandemic, he said Friday that “there’s nothing we can do to change the trajectory of the pandemic in the next several months.”

.@JoeBiden: "There is nothing we can do to change the trajectory of the pandemic in the next several months." pic.twitter.com/VGTBdgPSIf