The assault on freedom of speech in America is accelerating, with a former Facebook executive calling for news outlets on the political right to be deplatformed by telecom giants including Comcast, AT&T and Verizon.

The stunning remarks Sunday came from Alex Stamos, the former chief security officer at Facebook, during an appearance on CNN’s “Reliable Sources.”

“We have to turn down the capability of these conservative influencers to reach these huge audiences,” Stamos declared.

“There are people on YouTube for example that have a larger audience than daytime CNN, and they are extremely radical and pushing extremely radical views. So it’s up to the Facebooks and YouTubes in particular to think about whether or not they want to be effectively cable networks for disinformation.”

Stamos then named two conservative influencers he thought should be targeted as soon as possible – Newsmax and OANN, the One America News Network – both of which he called a “problem.”

“We’re gonna have to figure out the OANN and Newsmax problem,” he said.

“These companies have freedom of speech, but I’m not sure we need Verizon, AT&T, Comcast and such to be bringing them into tens of millions of homes. This is allowing people to seek out information if they really want to, but not pushing it into their faces. I think it’s where we’re gonna have to go here.”

On CNN this morning:

"We have to turn down the capability of these Conservative influencers to reach these huge audiences."

Then calls for @OANN and @Newsmax to be deplatformed. pic.twitter.com/X34oewb1oU

Stamos’ comments came the same day that Parler, a popular right-leaning alternative to Facebook, was struggling to return to the internet, after being booted by Amazon Web Services for an alleged lack of moderation amid the Jan. 6 riots at the U.S. Capitol.

“Hello world, is this thing on?” Parler CEO John Matze said in a static image posted on his homepage.

“Now seems like the right time to remind you all – both lovers and haters – why we started this platform,” he wrote.

“We believe privacy is paramount and free speech essential, especially on social media. Our aim has always been to provide a nonpartisan public square where individuals can enjoy and exercise their rights to both. We will resolve any challenge before us and plan to welcome all of you back soon. We will not let civil discourse perish!” 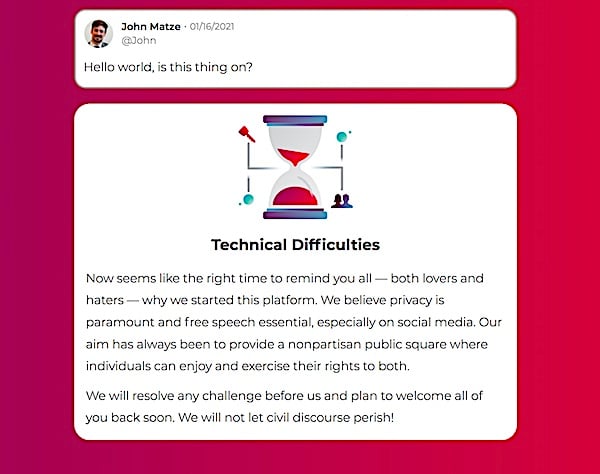 Parler now appears to be hosted by Epik, which also hosts Gab, a similar freedom-of-speech-friendly website, according to a WHOIS search.

Parler is engaged in a legal battle with Amazon, as the social site claims “Amazon was primarily concerned with whether President Donald Trump would migrate to Parler after his Twitter account was banned last week,” according to the Epoch Times.

Amazon wasn’t the only tech giant to drop the hammer on Parler, as Apple and Google removed the company from their app stores.

Matze told Fox News on Sunday he was surprised by the instant removal of his website: “Amazon, as usual, [was] basically saying, ‘Oh, I never saw any material problems. There’s no issues. You know, they played it off very nonchalantly. And so we had still even, you know, on the 8th and the 9th [of January], you know, we had no real indication that this was, you know, deadly serious.”