As the process of reconciling the House and Senate versions of his $1.9 trillion stimulus package continues, President Joe Biden appears to be backing away from yet another progressive priority: hiking the minimum wage.

Thousands of Americans took to the streets this week to demand $15/hour minimum wage and hazard pay for vulnerable low-wage workers. Just the other day, Wal-Mart promised that it would raise its internal minimum wage to $15 an hour. Yet now Joe Biden and his fellow Democrats, who control both chambers of Congress, are officially axing the wage hike.

It’s not exactly a surprise. Biden has been saying he probably wouldn’t be able to get the minimum wage stuff in the final version of the $1.9 trillion stimulus bill, which is currently being hammered out by legislators from both the House and Senate in a process known as reconciliation.

And in a call late last week, Biden reportedly told a group of governors and mayors from around the country that a minimum wage hike simply wouldn’t make it through the reconciliation

“I really want this in there but it just doesn’t look like we can do it because of reconciliation,” Biden told the group, according to a person in the room. “I’m not going to give up. But right now, we have to prepare for this not making it.”

Although Dems control both houses, Biden insists that the minimum wage hike must be bipartisan, and even reportedly asked Maryland Gov. Larry Hogan for help on that, though according to the report,

Instead, Biden said he would consider $10k – though he remains wary of appearing to bail out students from elite universities. Since at least Superbowl Sunday, Biden has been saying that the minimum wage hike probably wouldn’t make the final bill.

And it’s not hard to see why: Because on some level, Biden fears the blowback. Runaway inflation and the elimination of millions of low-wage jobs (which are still jobs at the end of the day) could cause serious economic chaos right now, with global equities just off record highs. 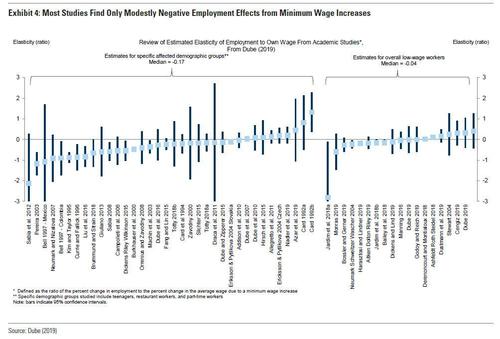 Economists, on the other hand, worry about the blowback to the labor market. One Goldman analysis found a correlation between rising minimum wage and job rates, though Goldman adds that “there are only a handful of studies of hikes as large as the $15 proposal because few hikes this large have occurred in the US or elsewhere.”