President Biden in his relatively brief remarks warned that he “could have gone further” with Thursday’s already extensive anti-Russia sanctions, but he wanted to be “proportionate” – and he even underscored that the offer of a face-to-face summit with President Putin is still on the table, likely to be held over the summer, according to the remarks.

Biden said “If Russia continues to interfere with our democracy, I’m prepared to take further actions” while also at the tail-end of the remarks mentioning the Russian troop build-up near Ukraine. “Now is the time to de-escalate,” he warned Moscow.

Proposed to Putin they meet this summer in Europe and @POTUS says he believes that summit will occur. pic.twitter.com/s9m3NJW70n

Though just a month ago Biden in an ABC interview agreed that Putin is “a killer” who is “soulless”, the president underscored that his Tuesday phone call with the Russian leader was “candid and respectful.”

Biden also mentioned the agreed upon extension of the New START nuclear arms reduction treaty as a rare bright spot, suggesting hope for improved relations, as he also emphasized the US isn’t seeking to “escalate”.

Pres. Biden on Russia sanctions: "I was clear with Pres. Putin that we could have gone further, but…I chose to be proportionate."

"If Russia continues to interfere with our democracy, I'm prepared to take further actions." https://t.co/JGc4ljGUCO pic.twitter.com/XYMRsij3tI

All of this of course signals we are in for a long-haul “carrot and stick” approach by the Biden administration, but then again in the past Putin has proven he likely won’t play Washington’s game so predictably.

“The summit format will also please the Kremlin by effectively cutting Kyiv out of any negotiations, and allow Putin to project the image of two global superpowers deciding the future fate of the conflict.”https://t.co/MWrvMu7foq

After Biden imposed tough new sanctions on Russia in response to alleged election ‘interference’ and cyberhacks Thursday morning – foremost among them in response to the SolarWinds incident – the president is scheduled to follow-up with televised remarks on Russia around 4:30pm Eastern time.

He’s expected to address the Kremlin’s “malign activities” including the current Russian troop build-up near Ukraine, the Alexei Navalny affair, the “Afghan bounties” allegations, and of course all things ‘Russian election meddling’.

All of this will no doubt further chill US-Russia relations, already at a low-point, despite Tuesday’s Biden-Putin phone call wherein the US president offered to meet with Putin face-to-face “in a third country in the coming months.”

Later in the day Thursday following the White House and Treasury sanctions announcements, which further included the US banning banks from buying new Russian sovereign debt starting June 14, White House press secretary Jen Psaki fielded questions over the executive order and claimed, “Our objective here is not to escalate.” 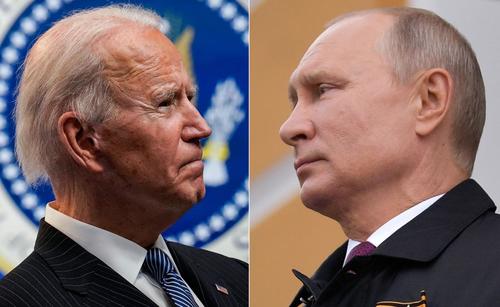 She explained: “Our objective here is to impose costs for what we feel are unacceptable actions by the Russian government,” in the briefing.

“We can’t predict what the impact will be, but we still believe that when there’s unacceptable behavior, we should put consequences in place,” Psaki said.

The Kremlin’s first move was to summon the US ambassador for a “difficult conversation”. The Moscow Times previews where things are expected to go from here as follows:

And the report has a quick overview of the extensive US actions targeting Russian government entities, officials, companies, and the economy Thursday…