Yet another federal court has decided to block the Biden White House’s COVID mandate, only this time the judge focused on a requirement for health-care workers to either get the jab, or say goodbye to their jobs. 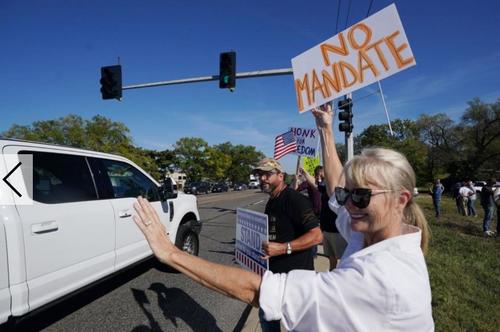 Earlier this month, a judge in Texas blocked the White House from enforcing some of its mandate by way of large corporations. Now, a different federal district judge, this time in Missouri, is blocking the Biden administration from enforcing a vaccine mandate for health-care workers in some 10 states.

Meanwhile, as more courts object to the mandate, the White House is quietly telling federal agencies they can hold off on firing federal workers for not complying with the vaccine mandate until after the holidays, according to a memo obtained by the press on Monday. The decision was sourced to OMB, the White House’s Office of Management and Budget, according to the report.

JUST IN: White House is telling federal agencies they can hold off on suspending or firing federal workers for not complying with the vaccine mandate until after the holidays, according to a memo obtained by @ABC News. https://t.co/iUvXz9Vxev pic.twitter.com/CzaBeDoHqX

According to Biden-loving ABC News, this change, which has not yet been publicly announced, comes as President Biden is putting pressure on private employers to launch their own mandates.

The US District Court for the Eastern District of Missouri on Monday issued a preliminary injunction on the mandate, which requires health-workers to be vaccinated by Jan. 4, 2022.

Legal observers have said the mandate is on firm footing. If the injunction is appealed, it would land in the Eighth Circuit, which has just one active or senior status judge appointed by a Democrat out of 14.

Biden announced back in September that the administration was rolling out the rule requiring all private employers with 100 or more employees to mandate COVID-19 vaccines or weekly testing for the virus.

In their filing, government lawyers argued that delaying the vaccine mandate “would endanger many thousands of people and would likely cost many lives per day. With the reopening of workplaces and the emergence of the highly transmissible Delta variant, the threat to workers is ongoing and overwhelming.”