Twitter just turned up the rage amplifier to ’11’ and has decided to lock President Trump’s account for the next 12 hours.

And in a redux of the NYPost debacle, Twitter notes that if the ‘offending’ tweets are not removed, the account (with 88.7 million followers) will remain locked.

This means that the account of @realDonaldTrump will be locked for 12 hours following the removal of these Tweets. If the Tweets are not removed, the account will remain locked.

Future violations of the Twitter Rules, including our Civic Integrity or Violent Threats policies, will result in permanent suspension of the @realDonaldTrump account.

If you are somewhat shocked at this, The Federalist’s Sean Davis can help:

“Twitter has locked the President of the United States out of his account and threatened to ban him for <checks notes> calling for peace and telling violent rioters, “You have to go home.”

We wonder what this will do for Parler traffic?

For the first time ever, Twitter – which until now had merely “moderated” Trump’s tweets – took the unprecedented step of actually deleting the president’s tweets, removing three of this latest posts.

So far, Twitter has deleted at least three Trump tweets this evening alone. 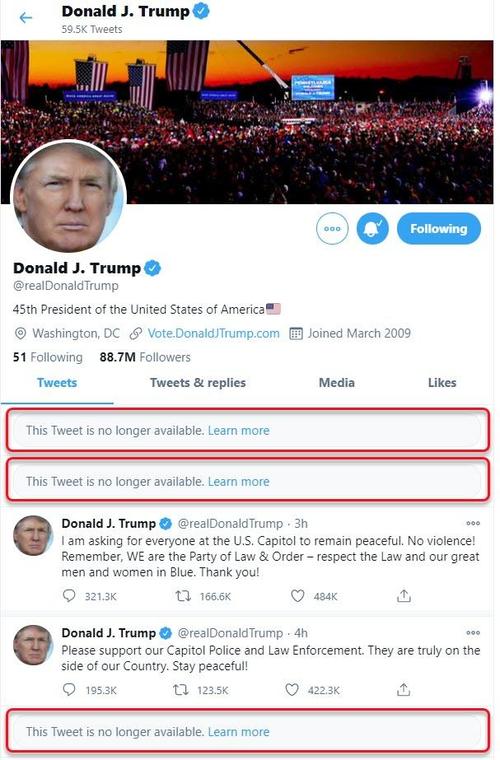 Of course, leftists celebrated the decision by Jack Dorsey & Co.

At the same time, using almost the exact same language, Facebook also decided that video, photos and other content pertaining to Tuesday’s events must be “restricted” (despite the fact that the companies had no qualms with sharing such content during the “peaceful protests” that rocked the country following the killing of George Floyd).

Facebook then followed Twitter’s lead and decided that it would crack down on the president’s page, deciding to remove the video where President Trump asks the protesters to stand down, along with other posts for “inciting violence” – even though that’s literally the opposite of what Trump said during the videotaped statement from earlier.

Twitter took down a video of Trump telling people to act peacefully and go home. Is @Jack encouraging violence? pic.twitter.com/82fIV46nR6

Here’s what a senior VP from FB said about the company’s reasoning:

“We removed it because on balance we believe it contributes to rather than diminishes the risk of ongoing violence.”

Breaking: Facebook has removed Trump's video from the platform

This is an emergency situation and we are taking appropriate emergency measures, including removing President Trump's video. We removed it because on balance we believe it contributes to rather than diminishes the risk of ongoing violence.

the emphasis of it being an emergency removal and extreme measures is likely b/c the language in the video itself does not include an explicit, direct call for violence, which FB has said in the past was a requisite for removal

Meanwhile, the NYT reports that calls to bar Trump from Twitter permanently are intensifying.

Trump's newest post is up on his FB page. again, delegitimizing election and supporting today's events and the MAGA people behind them pic.twitter.com/yYIPFTGnPk

At this point Facebook is actually taking a (relatively) stronger approach to POTUS' posts than Twitter, which is the opposite of how it has gone in the past.

To be sure, none of this is new. Twitter and Facebook both started tagging or removing posts last year, which is what inspired President Trump’s push to strip social media companies of the protections afforded by Section 230 of the Communications Decency Act.