President Trump’s personal blog has been scrubbed from his own website after being live for less than a month.

“From the Desk of Donald J. Trump” had been prominently featured at Trump’s site, but it “will not be returning,” his senior aide Jason Miller told CNBC.

“It was just auxiliary to the broader efforts we have and are working on,” Miller noted, without providing specifics.

“Hoping to have more information on the broader efforts soon, but I do not have a precise awareness of timing,” he added. 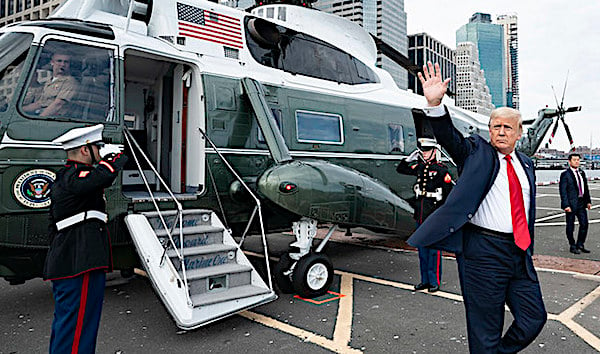 When Miller was later asked online if the shutdown were merely a “precursor” to Trump hopping onto “another social media platform,” Miller indicated: “Yes, actually, it is. Stay tuned!”

The left-leaning site RawStory reported “merciless” mocking from Trump’s opponents once news of the shutdown broke:

“Trump’s blog has been shut down permanently,” Thomas Yantorno wrote. “Another failure in a endless list [of] failures, bankruptcies and financial losses. History will judge as the biggest loser in American history.”

“No one cared about the Trump blog and its traffic was dismal at best,” political commentator Ameshia Cross noted.

“Gosh, you’d think trump would’ve wanted his blog up and running for when he’s *reinstated* in Aug. #Sad,” another commenter joked.

“I’ve had kidney stones that lasted longer than Trumps blog…and they were more bearable,” one Twitter user said.”

Steve Benen at MSNBC wrote that at a certain level, the shutdown didn’t come as too big of a surprise.

“After all, at issue was a former president with an unimpressive blog, utilizing outdated tech, which apparently didn’t even allow for clean paragraph breaks. Of course its traffic was weak,” Benen said.

“But the context made matters worse. For one thing, Team Trump said his online presence would ‘redefine the game,’ which, as his blog disappears after less than a month, obviously did not happen.

“For another, Trump is supposed to be overseeing a legion of obsessive followers who eagerly await his every thought. Evidently, these supporters continue to hold the former president in high regard, but they couldn’t be bothered to check out his underwhelming website.”