President Trump has responded to today’s announcement, saying: “There is nothing more corrupt than an investigation that is in desperate search of a crime. But, make no mistake, that is exactly what is happening here.”

Full statement, which you can tell Trump typed because it’s a giant wall of text (emphasis ours):

I have just learned, through leaks in the mainstream media, that after being under investigation from the time I came down the escalator 5 ½ years ago, including the fake Russia Russia Russia Hoax, the 2 year, $48M, No Collusion Mueller Witch Hunt, Impeachment Hoax #1, Impeachment Hoax #2, and others, that the Democrat New York Attorney General has “informed” my organization that their “investigation” is no longer just a civil matter but also potentially a “criminal” investigation working with the Manhattan District Attorney’s Office. There is nothing more corrupt than an investigation that is in desperate search of a crime. But, make no mistake, that is exactly what is happening here. The Attorney General of New York literally campaigned on prosecuting Donald Trump even before she knew anything about me. She said that if elected, she would use her office to look into “every aspect” of my real estate dealings. She swore that she would “definitely sue” me. She boasted on video that she would be, and I quote, “a real pain in the ass.” She declared, “just wait until I’m in the Attorney General’s office,” and, ”I’ve got my eyes on Trump Tower.” She also promised that, if elected, she would “join with law enforcement and other Attorney Generals across this nation in removing this President from office,” and, “It’s important that everyone understand that the days of Donald Trump are coming to an end.” The Attorney General made each of these statements, not after having had an opportunity to actually look at the facts, but BEFORE she was even elected, BEFORE she had seen even a shred of evidence. This is something that happens in failed third world countries, not the United States. If you can run for a prosecutor’s office pledging to take out your enemies, and be elected to that job by partisan voters who wish to enact political retribution, then we are no longer a free constitutional democracy. Likewise, the District Attorney’s office has been going after me for years based on a lying, discredited low life, who was not listened to or given credibility by other prosecutorial offices, and sentenced to 3 years in prison for lying and other events unrelated to me. These investigations have also been going on for years with members and associates of the Trump Organization being viciously attacked, harassed, and threatened, in order to say anything bad about the 45th President of the United States. This would include having to make up false stories. Numerous documents, all prepared by large and prestigious law and accounting firms, have been examined, and many hours of testimony have been taken from many people, some of whom I have not seen in years. These Democrat offices are consumed with this political and partisan Witch Hunt at a time when crime is up big in New York City, shootings are up 97%, murders are up 45%, a rate not seen in 40 years, drugs and criminals are pouring into our Country in record numbers from our now unprotected Southern Border, and people are fleeing New York for other much safer locations to live. But the District Attorney and Attorney General are possessed, at an unprecedented level, with destroying the political fortunes of President Donald J. Trump and the almost 75 million people who voted for him, by far the highest number ever received by a sitting President. That is what these investigations are all about—a continuation of the greatest political Witch Hunt in the history of the United States. Working in conjunction with Washington, these Democrats want to silence and cancel millions of voters because they don’t want “Trump” to run again. As people are being killed on the sidewalks of New York at an unprecedented rate, as drugs and crime of all kinds are flowing through New York City at record levels, with absolutely nothing being done about it, all they care about is taking down Trump. Our movement, which started with the Great Election Win of 2016, is perhaps the biggest and most powerful in the history of our Country. But the Democrats want to cancel the Make America Great Again movement, not by Making America First, but by Making America Last. No President has been treated the way I have. With all of the crime and corruption you read about with others, nothing happens, they only go after Donald Trump. After prosecutorial efforts the likes of which nobody has ever seen before, they failed to stop me in Washington, so they turned it over to New York to do their dirty work. This is what I have been going through for years. It’s a very sad and dangerous tale for our Country, but it is what it is, and we will overcome together. I have built a great company, employed thousands of people, and all I do is get unfairly attacked and abused by a corrupt political system. It would be so wonderful if the effort used against President Donald J. Trump, who lowered taxes and regulations, rebuilt our military, took care of our Veterans, created Space Force, fixed our border, produced our vaccine in record-setting time (years ahead of what was anticipated), and made our Country great and respected again, and so much more, would be focused on the ever more dangerous sidewalks and streets of New York. If these prosecutors focused on real issues, crime would be obliterated, and New York would be great and free again!

In a case of incredible timing, the state of New York announced on Tuesday that it’s opened a criminal investigation into the Trump organization, just as former President Trump re-enters the political fray ahead of the 2022 midterm elections. 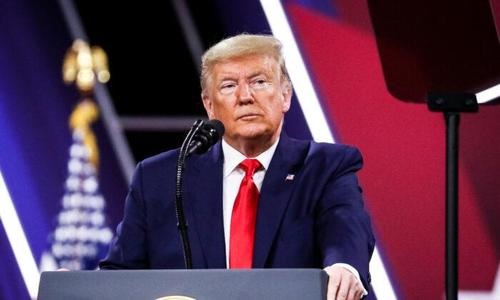 According to Reuters, NY Attorney General Letitia James has been investigating whether the Trump Organization purposefully misreported property values in order to secure loans and obtain economic and tax benefits. The case marks the third known criminal investigation into the former president or his organizations since he left office.

The Trump Organization, the former president’s family-owned business, could not immediately be reached for comment. Trump has said that the investigation overseen by James, a Democrat, is politically motivated.

James has been investigating whether the Trump Organization inflated the values of some properties to obtain better loans, and lowered their values to obtain property tax breaks.

Vance’s office has said in court filings it was investigating “possibly extensive and protracted criminal conduct” at the Trump Organization, including tax and insurance fraud and falsification of business records. -Reuters

Both are examining how the Trump Organization and its agents assessed the value of Seven Springs, a 212-acre estate north of Manhattan that Trump purchased in 1995. Trump’s company has said the century-old, 50,000-square-foot mansion on the grounds was used as a Trump family retreat.

Trump’s ambitions to build a championship golf course there were derailed by local opposition, and he shelved another plan to build luxury homes.

But the property did become a vehicle for a tax break, according to property records and court filings. In 2015, he signed a conservation easement – an agreement not to develop the property – covering 158 acres.

According to the attorney general’s office, a Trump-hired appraiser set the value of Trump’s Seven Springs property at $56.5 million, and the easement value at $21.1 million – an amount claimed by Trump as an income tax deduction.

We’re surprised Trump didn’t just cut Vance a check to look the other way, like Harvey Weinstein did. Vance’s probe was launched following accusations that Trump paid two women to keep quiet about sexual trysts which allegedly occurred a decade before the 2016 election. Reuters omits from its report that the Federal Election Commission dropped its inquiry into whether Trump violated campaign finance laws in doing so.

Meanwhile, prosecutors in Fulton County, Georgia launched a criminal investigation into Trump’s alleged attempts to influence the state’s 2020 election results by asking the Secretary of State to locate fraudulent or uncounted ballots.