“Both the House managers and the defense will have a period of time to draft their legal briefs just as they did in previous trials. … Once the briefs are drafted, the presentation by the parties will commence the week of Feb. 8,” Schumer said from the Senate floor (in dramatic fashion)…

JUST IN: The impeachment trial of Donald J. Trump is set to begin the week of February 8th pic.twitter.com/78bWC3liNk 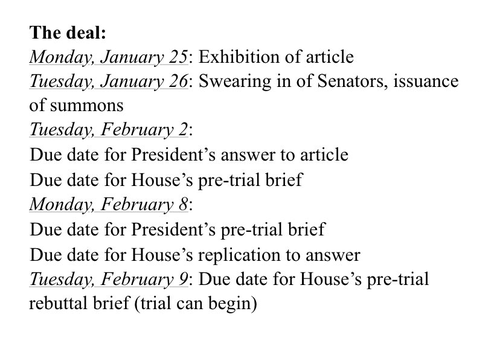 “Leader McConnell is glad that Leader Schumer agreed to Republicans’ request for additional time during the pre-trial phase. Especially given the fast and minimal process in the House, Republicans set out to ensure the Senate’s next steps will respect former President Trump’s rights and due process, the institution of the Senate, and the office of the presidency,” said Doug Andres, a spokesman for McConnell.

Finally, in yet another news-cycle-grabbing repeat of what has been discussed numerous times, The Hill reports that Democrats are mulling whether they can use the 14th Amendment to prevent former President Trump from ever holding office again.

“It’s an idea that’s out there that I think people are contemplating in the accountability space,” said Sen. Tim Kaine (D-Va.), who described himself as “quite confident” that Congress could act under the constitutional amendment.

Sen. Richard Blumenthal (D-Conn.), who caveated that talk of the 14th Amendment was hypothetical, said it could be applied to Trump, with one mechanism being a resolution from Congress.

“The remedies of the 14th Amendment certainly may be appropriate for someone who incites an insurrection as Donald Trump did,” said Blumenthal, a member of the Senate Judiciary Committee.

An “idea” that would suggest the Democrats’ real agenda.

“We’ll do something, but not just yet,” Trump told Rob Crilly of the Washington Examiner on Friday.

This is slightly ahead of McConnell’s plan – which had hoped for delivery on January 28th – but as far as the rest of the timeline is concerned, there is no apparent change yet.

The apparent rush seems to signal that Democrats are more keen to stop Trump from ever being able to run for office again than they are for providing stimulus to Americans?

While the left is split between wanting to hammer the final nail in Trump’s coffin (through the Senate impeachment trial) and tending to its aggressive agenda of new laws, spending, and government control, U.S. Senate Republican Leader Mitch McConnell (R-KY) issued a statement today regarding his proposed timeline for the first phases of an impeachment trial of former president Trump.

“I have sent a proposed timeline for the first phases of the upcoming impeachment trial to Leader Schumer and look forward to continuing to discuss it with him.

“Senate Republicans are strongly united behind the principle that the institution of the Senate, the office of the presidency, and former President Trump himself all deserve a full and fair process that respects his rights and the serious factual, legal, and constitutional questions at stake. Given the unprecedented speed of the House’s process, our proposed timeline for the initial phases includes a modest and reasonable amount of additional time for both sides to assemble their arguments before the Senate would begin to hear them.

“At this time of strong political passions, Senate Republicans believe it is absolutely imperative that we do not allow a half-baked process to short-circuit the due process that former President Trump deserves or damage the Senate or the presidency.”

When the articles arrive, the House Managers would exhibit (read) the articles to the Senate, Senators would be sworn in the Members as the Court of Impeachment, and would issue a summons to former President Trump.  While we do not know what day the Managers will choose, Leader McConnell has asked for this to occur on Thursday, January 28.

Former President Trump would have one week from that day to answer the articles of impeachment (February 4).  The House’s pre-trial brief would also be due then.

The President would then have one week from the day he submits his answer to submit his pre-trial brief (February 11).  That means former president Trump has fourteen total days from when we issue the summons to write his pre-trial brief.  The House would also submit its replication on this date.

The House would then have two days to submit their rebuttal pre-trial brief (February 13).

This approach tracks the structure of the Clinton and Trump pre-trial processes.

The periods between due dates are longer than in 1999 or 2020, but this is necessary because of the House’s unprecedented timeline.

So far we have not seen any response from Senate Democrat Leader Schumer, but we do note the timing is ironic as (in what appears to be more PR stunt than anything else) freshman Rep. Marjorie Taylor Greene announced via Twitter video Thursday that she’s filed articles of impeachment on President Joe Biden.

I just filed Articles of Impeachment on President @JoeBiden. pic.twitter.com/mcwEEkKiHL

As SaraACarter.com’s Jennie Taer reports, Rep. Greene earlier pledged on Newsmax on January 13 to do so on the first day of Biden’s presidency, as reported.

“We cannot have a President of the United States that is willing to abuse the power of the office of the presidency and be easily bought off by foreign governments, foreign Chinese energy companies, Ukrainian energy companies. So on January 21st, I will be filing articles of impeachment on Joe Biden,” said Rep. Greene.

"On behalf of the American people – on January 21st I will be filing articles of impeachment on Joe Biden."

As w3e noted, while this is unlikely to proceed, that did not stop Democratic Reps such as Al Green from incessantly posting articles during Trump’s term (as early as May 2017).