Biden’s team is directly contradicting an earlier statement by Acting Defense Secretary Chris Miller which sought to severely downplay the controversy, claiming Biden transition officials had agreed to a holiday “break” in DoD intelligence briefings. “There was no mutually agreed upon holiday break” for transition briefings, Biden’s spokesman Yohannes Abraham has stated pushing back against Miller’s explanation.

“We were concerned to learn this week about an abrupt halt” in cooperation, Biden’s team said at a Friday briefing, and underscored the alarming move reflects “isolated resistance in some quarters, including from political appointees within the Department of Defense.”

Just in: Biden transition officials say on a press call that they didn't agree with the Pentagon to a holiday break in transition briefing. Biden's review team was made aware that meetings were cancelled. They are asking for DoD to restart briefings immediately.

It comes after Trump admin officials were reportedly enraged over alleged leaks from the Biden transition team designed to embarrass Trump politically.

Here’s the prior statement from SecDef Miller that refuted the central claims of the Friday morning Axios story:

Axios’ Jonathan Swan reports a bombshell potential major disruption in a key part of the presidential transition before President-Elect Joe Biden is sworn in on January 20: the Pentagon has without warning or explanation halted Biden’s intelligence transition briefings.

Biden’s team has so far maintained that it’s unaware of the directive while Pentagon officials are said to be stunned and in the dark: “Administration officials left open the possibility cooperation would resume after a holiday pause,” the breaking Axios report notes. “The officials were unsure what prompted Miller’s action, or whether President Trump approved.” 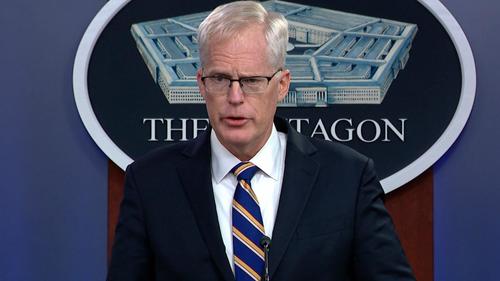 “Miller’s move, which stunned officials throughout the Pentagon, was the biggest eruption yet of animus and mistrust toward the Biden team from the top level of the Trump administration,” Axios details.

However at least one senior Defense Department official downplayed the halt in Pentagon cooperation with President-Elect Biden, calling it “a simple delay of the last few scheduled meetings until after the new year.”

But Jonathan Swan in a follow-up tweet noted this is all spin, saying “there was NOTHING routine about this decision” and appears part of an emerging information and intelligence war between the White House and president-elect Biden’s team.

Contrary to this Pentagon spin, there was NOTHING routine about this decision. Senior Trump officials have been furious at the Biden team, privately blaming them for leaks, and this decision was discussed last night with the White House. https://t.co/tH6741ifwV

Previously scheduled Pentagon meetings with the Biden transition team have been canceled, according to senior national security correspondent for Defense One, Katie Bo Williams.

For now it appears that the sudden halt or pause is being blamed ostensibly on the holidays.

It remains unclear the degree to which the Biden team has been informed or is cooperative in the change, which appears to have involved at least today’s briefing being unexpectedly canceled “without notice”.

I can now confirm that this two-week break was agreed to by the Biden team. Today’s meetings, however, were canceled without notice. Definitely fair to say Trump officials frustrated with the Biden transition team and blame them for leaks, but FWIW…

“These same senior leaders needed to do their day jobs and were being consumed by transition activities… With the holidays we are taking a knee for two weeks. We are still committed to a productive transition,” the DoD source told Swan.