As President Donald Trump continues to maintain there was massive voter fraud that illegally tilted the 2020 presidential election to Joe Biden, the commander in chief was hammered Sunday by Republican U.S. Sen. Mitt Romney who used the phrase “nutty and loopy” to describe Trump’s actions of late.

Appearing on CNN’s “State of the Union” with Jake Tapper, Romney said, “I understand the president is casting about, trying to find some way to have a different result than the one that was delivered by the American people.”

“It’s really sad in a lot of respects and embarrassing because the president could, right now, be writing the last chapter of this administration with a victory lap with regards to the vaccine.”

“He’s leaving Washington with a whole series of conspiracy theories and things that are so nutty and loopy that people are shaking their head wondering, ‘What in the world has gotten into this man?’

“And I think that’s unfortunate, because he has more accomplishments than this last chapter suggests he’s going to be known for.”

Romney also lamented the state of today’s Republican Party which has essentially become the party of Trump.

“The party has taken a different course than obviously the one that I knew as a younger person,” Romney explained.

“The party that I knew is one that was very concerned about Russia and [Vladimir] Putin and Kim Jong Un and North Korea, and we pushed back aggressively against them. We were a party concerned about balancing the budget.

“We believed in trade with other nations, we were happy to play a leadership role on the world stage because we felt that made us safer and more prosperous, and we believed that character was essential in the leaders that we chose.” 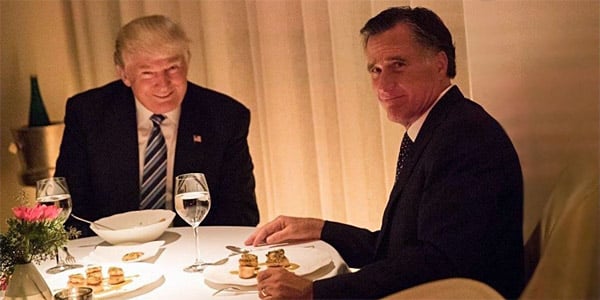 “We’ve strayed from that. I don’t see us returning to that for a long time. As I look at the 2024 [Republican presidential] contenders, most of them are trying to become as much like Donald Trump as they can be, although that I must admit that his style and schtick, if you will, is difficult to duplicate. He’s an extraordinarily talented person from that standpoint. But I represent a very small slice of the Republican Party today.”

When asked by Tapper if he planned to leave the Republican Party, Romney indicated he would stay and fight for change from within.

“So, we’ll get back at some point and, hopefully, people will recognize we need to take a different course than the one we are on right now.”