In the world of Democrat politics, there are no coincidences. With that principle in mind, it’s possible to understand why Democrat media outlets are suddenly reporting about Hunter Biden’s corruption, a story that spills over onto his father. The first is to get ahead of potential breaking news about Hunter’s imminent arrest. The second theory is the one Monica Showalter advanced: The leftists used Biden to attain the White House (or so they believe) and are now ready to get rid of him. Having a criminal son may be just what the Obama/Harris camp needs to make that happen. And if there’s any doubt about this theory, an article in The New York Times seems to lay it to rest.

We conservatives remember how, in October, the media and the tech tyrants conspired to block any reports about Hunter Biden, whether those reports were the Senate Intelligence Committee’s findings about the $3.5 million Hunter received from the wife of a Russian politician, or the shocking details of political corruption, drug addiction, and sexual debauchery contained on his hard drive.

Well, to ordinary people, these stories were shocking. To the media and the tech tyrants, these stories were potential dangers to Joe Biden’s candidacy. They had to be stopped – and stopped they were. Twitter and Facebook, the two biggest social media tech tyrants, refused to allow any reports to circulate and banned people, including President Trump’s press secretary, from their platforms when they refused to bow down to this censorship.

News outlets derided the reports about the Biden family’s corrupt dealings, all of which implicated Joe Biden as the man who pimped out his addled son for huge sums of money, as non-stories. That’s not an exaggeration. It’s explicitly what NPR’s public editor said: 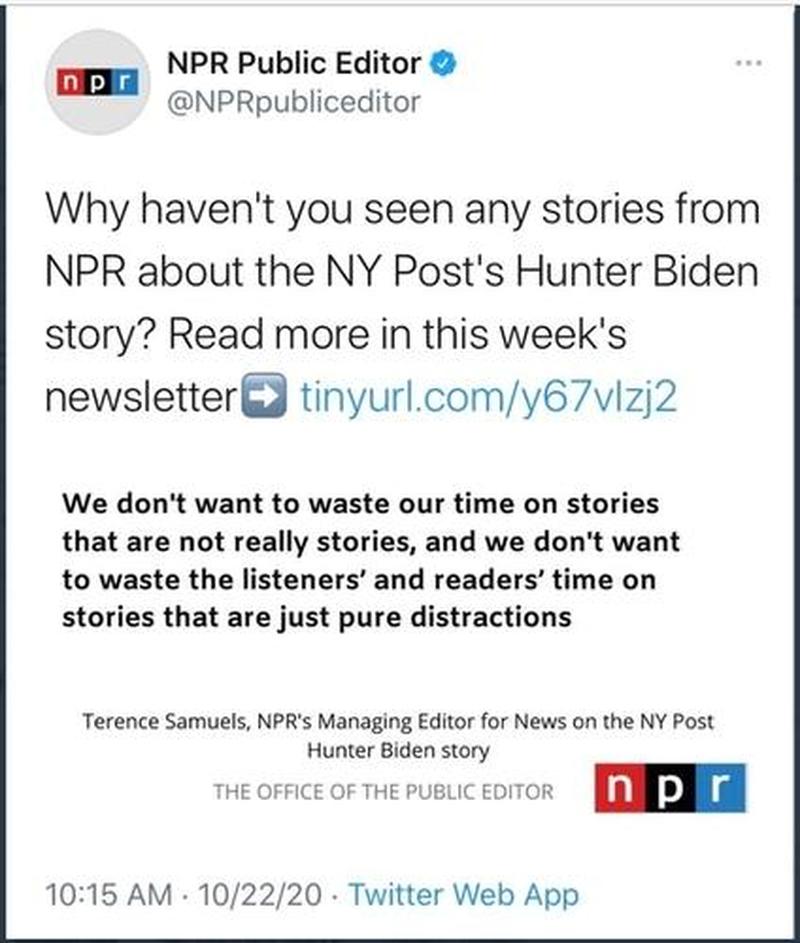 Likewise, CNN’s Christiane Amanpour, who’s served as a shill for every tyrannical regime on earth, insisted that, because she was a real “journalist,” it was not her job to investigate stories. Instead, it was only her job to determine whether the results of other people’s investigations met her standards. The Hunter Biden story did not:

Of all the media deceit and propagndizing disseminated in the lead-up to the election to justify their refusal to report on the Hunter Biden documents — despite knowing they were genuine and not from Russia — this on CNN from @camanpour may be the most amazing: pic.twitter.com/mkI4Jtd4SN

When President Trump tried to bring the story to Americans’ attention during the first presidential debate, Biden snapped back that it was Russian disinformation, a lie that the media and tech tyrants enthusiastically disseminated

Turns out, Hunter's business dealings with China had been under investigation since 2018.

Suddenly, though, the media is releasing information about the criminal investigations into not both Hunter Biden and Joe’s brother, James Biden. As the above tweet notes, these investigations have been ongoing for years. We also know that a sizable number of voters would have passed over Biden for Trump had they known about Biden family corruption. So, what gives? Why are Hunter and, by extension, Joe himself, suddenly fair game?

It could be that bad things are about to come down from the FBI. After all, Trump did promise that “a lot of big things” will happen soon. The sudden flurry of reports about the Bidens could just be the Democrats’ way of getting ahead of the story so that, if Hunter is shown doing the perp walk, they can say that it’s “old news.”

However, it’s equally likely that the Democrats are making plans to get Biden out of office as quickly as possible – or perhaps, sideline him before he’s even sworn in (assuming, of course, that Biden hangs onto that president-elect title). As Monica Showalter pointed out on Thursday, Biden is not making leftists happy. He’s filling his possible administration with corporate insiders, he wants a former military officer to head the defense department, and he’s continuing to show a very rapid cognitive decline. He’s offering Clinton-era politics with a side of dementia and that is not what the hard left side of the party wants.

In any event, the goal, always, was to get Kamala into the White House. It didn’t and doesn’t matter that the voters don’t like her — as demonstrated by the fact that even her home state of California didn’t like her and her early retreat from the primaries. What matters is that she, unlike both Hillary and Joe, is Barack Obama’s true third term.

Harris is as hard left as they come and willing to do whatever it takes to maintain power. While Joe Biden, despite his corruption and his shift to the hard left, still cherishes some residual notions about the Constitution, Kamala is not hindered by such old-fashioned ideas:

FLASHBACK: Kamala Harris laughs when Joe Biden brings up the fact that the Constitution would prevent the President from taking Executive Action to confiscate guns.

I wonder how they both feel about this issue now. pic.twitter.com/33NjAnL5Ic

With Americans at large finally learning that Hunter Biden and James Biden are crooked and that Joe is the big, corrupt tree from which these rotten apples fell, there’s going to be lots of pressure on Joe to retire as quickly as is politely possible. It’s The New York Times that gives the game away. On Thursday, it published a positively wistful article entitled “Investigation of His Son Is Likely to Hang Over Biden as He Takes Office: Unless the Trump Justice Department clears Hunter Biden, the new president will confront the prospect of his own administration handling an inquiry that could expose his son to criminal prosecution.” The opening paragraph, speaks of Biden in a “no-win situation” that could be “politically and legally perilous,” and the report continues in that vein. The subtext is clear: Leave. Leave now.

Joe served his purpose by being the bland front person for a full leftist assault on the White House. Now it’s time for him to go. And while his handlers may reward him for a job well done with the pleasure of the inauguration, you can be sure that they’ll pressure him to do what he promised to do, which is to invent a respectable disease and quit ASAP.