Comedian Bill Maher used his HBO show once again to highlight some awkward ‘facts’ and ask some uncomfortable questions about media and politicians approach to COVID.

He rightly decries the politicization of medicine and the manner in which the media has been a handmaiden of panic throughout. Let us hope that his monologue, transcript below, is a foreshadowing of what will soon emerge as the conventional wisdom.

“And finally new rule, don’t spin me when it comes to my health. Over the past year, the COVID pandemic has prompted the medical establishment, the media, and the government to take a scared straight approach to getting the public to comply with their recommendations. Well, I’m from a different school. Give it to me straight doc, because in the long run that always works better than you can’t handle the truth.

Now I get it, doctors tell people lies because they don’t trust you to finish the antibiotics…. And media, well, I think we all know if it bleeds, it leads. The more they can get you to stay inside and watch their panic porn the higher the ratings. Researchers at Dartmouth built a database recently monitoring the COVID coverage of the major news outlets across the world and found that while other countries mix the good news in with the bad, the U.S. national media reported almost 90% bad news. Even as things were getting better, the reporting remained negative. And politicians, they lie because it’s their nature to cover their ass. They don’t get blamed if things goes badly and also to keep in practice.

But when all of our sources for medical information have an agenda to spin us, yeah, you wind up with a badly misinformed population including on the left. Liberals often mock the Republican misinformation bubble, which of course is very real. Ask anyone who works at Hillary’s pizza parlor. And we do know conservatives have some loopy ideas about COVID like the third of Republicans who believe it couldn’t be spread by someone showing no symptoms. But what about liberals? You know the high information by the science people. In a recent Gallup survey,

So almost 70% of Democrats are wildly off on this key question and also have a greatly exaggerated view of the danger of COVID too and the mortality rate among children. All of which explains why today, the states with the highest share of schools that are still closed are all blue states. So if the right wing media bubble has to own things like climate change denial, shouldn’t liberal media have to answer for how did your audience wind up believing such a bunch of crap about COVID.

A new report in the Atlantic says the media won’t stop putting pictures of the beach on stories about COVID even though it’s looking increasingly like the beach is the best place to avoid it. Sunlight is the best disinfectant and vitamin D is the key to a robust immune system. Texas lifted its COVID restrictions recently and their infection rates went down in part because of people getting outside to let the sun and wind do their thing.

But to many liberals that can’t be right because Texas and beach loving Florida have Republican governors, but life is complicated.

I’ve read that the governor of Florida reads. I know we like to think of Florida as only middle school teachers on bath salts having sex with their students in front of an alligator but apparently the governor is also a voracious consumer of the scientific literature. And maybe that’s why he protected his most vulnerable population the elderly way better than did the governor of New York.

Those are just facts. I know it’s irresponsible of me to say them. Look, here’s what I’m saying, I don’t want politics mixed in with my medical decisions. And now that everything is politics… That’s all we do. If their side says COVID is nothing, our side has to say it’s everything. Trump said it would go away like a miracle. And we said it was World War Z. Trump said we should ingest household disinfectants and we laughed as we should of course. And then it turned out 19% of America was literally drenching the fruit in Clorox. And now of course, we find out that all that paranoia about surfaces was bullshit anyway even though we spent hours and hours wiping our knobs with Lysol. And if you’ve ever wiped your knob with Lysol, I think you know.

Now go home and wash the mail. If you lie to people, even for a very good cause you lose their trust. I think a lot of people… Thank you. I think a lot of people died because of Trump’s incompetence. And I think a lot of people died because talking about obesity had become a third rail in America. I know you’ve heard me pound this fried drumstick before, but since I last mentioned it, a stunning statistic was reported. 78% of those hospitalized, ventilated, or dead from COVID have been overweight. It is the key piece of the puzzle by far the most pertinent factor, but you dare not speak its name. Imagine how many lives could have been saved. If there had been some national campaign [inaudible 00:06:49] Michelle Obama’s Let’s Move Program with the urgency of the pandemic behind it.

If the media and the doctors had made a point to keep saying, but there’s something you can do. But we’ll never know because they never did because the last thing you want to do is say something insensitive. We would literally rather die. Instead, we were told to lock down. Unfortunately the killer was already in the house and her name is Little Debbie.”

Maher’s outburst is yet another example of something odd that has been happening recently. Viewpoints that would have got any non-leftist immediately banned from any and all social media outlets and canceled by the outrage mob are now being discussed, publicly, by leftists.

I would like to calmly suggest that now is the time we should consider no longer wearing masks when we walk around outside.

I am not suggesting this simply because I am very sick of wearing a mask at all times outside my home. When it comes to coronavirus spread, evidence shows that being outdoors is very, very safe.

…a rough sense of how unlikely outdoor transmission is in the scenario where you’re walking unmasked on the sidewalk and briefly pass someone.

“You’re talking about a probability of getting hit by a car, and being struck by lightning.”

…masks shouldn’t go on being a blunt-force declaration of safety; we should embrace their nuanced use, starting with the idea that they might be overkill in some settings outdoors. This is especially true for people who have been fully vaccinated, and for whom wearing a mask in an already very-low risk setting is more of a show of participation in pandemic society than a medical necessity.

This was Slate a month ago… 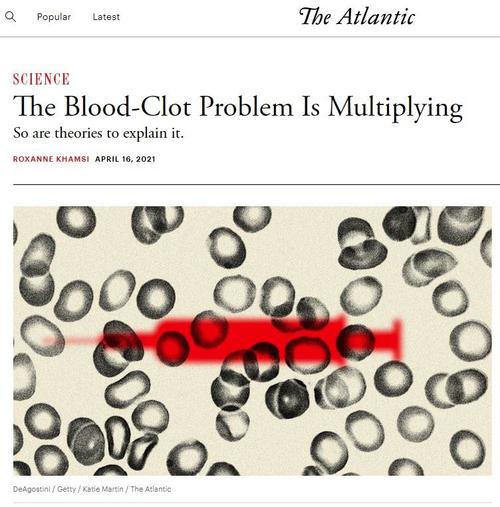 …it’s also crucial to determine the biological cause of any vaccine-related blood conditions. This global immunization project presents a lot of firsts: the first authorized use of mRNA vaccines like the ones from Pfizer and Moderna; the first worldwide use of adenovirus vectors for vaccines like AstraZeneca’s, Johnson & Johnson’s, and Sputnik V; and the first attempt to immunize against a coronavirus. Which, if any, of these new frontiers might be linked to serious side effects? Which, if any, of the other vaccines could be drawn into this story, too? How can a tiny but disturbing risk be mitigated as we fight our way out of this pandemic? And what might be the implications for vaccine design in the years to come?

Why are they suddenly raising these questions? Are liberals starting to doubt the ‘science’ they’ve been told? Maybe the Neanderthals were on to something?

Well it's been over a week since I checked on the Neanderthal and science states and sure enough, the rate of new cases in the science states is still 340% higher

The best part is that literally no one in media cares that the President, Fauci & the CDC were so unbelievably wrong pic.twitter.com/Yv9gfzT3Ya