Enthusiasm for GOP candidates in the 2022 midterm elections outpaces Democrats by double digits, while most GOP voters remain loyal to former President Donald Trump, according to a new poll reported by the Washington Examiner.

According to a left-wing Democracy Corps survey, 68% of Republicans remain engaged ahead of 2022, while Democratic engagement dropped to 57%, giving the GOP an 11-point lead.

Never Trumpers, meanwhile with 16% of Republicans identifying as “non-Trump conservatives,” – a figure which drops to 9% in battleground states. 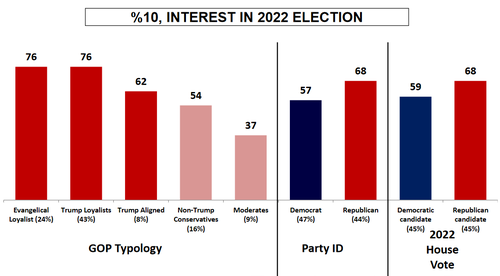 The poll comes after Republicans recently booted ‘Never-Trump’ Rep. Liz Cheney from her leadership position within the party for continuing to disparage Trump.

“Any member can take whatever position they believe in. … What we’re talking about is a position in leadership,” said House Minority Leader Kevin McCarthy on Cheney’s ouster. “As conference chair, you have one of the most critical jobs as a messenger going forward.”

Cheney, meanwhile, says she’s “do everything I can to make sure the former president never again gets anywhere near the Oval Office,” adding “We have seen the danger that he continues to provoke with his language.”

But that position has put Cheney on the outside of the mainstream of her party as the midterm elections near, with the survey indicating Trump’s footprints will be all over what could be another high turnout election. –Washington Examiner

What seems to be uniting Republicans the most, according to the poll? Opposition to Black Lives Matter, Antifa, and preventing discrimination against white people.

According to Democracy Corps, “Neither [party] is showing the level of interest of the presidential election in 2019 and 2020, but they are higher than a comparable point in 2018, suggesting the era of high turnout elections is not over,” adding “And with such high early engagement of Republicans and white working class voters in this survey, it means the era of Donald Trump shaping the electorate is not over either.”