Dr. Anthony Fauci, the nation’s top infectious diseases expert and highest paid federal employee in the country, is on another Sunday media junket – telling Fox News’ Chris Wallace that a new wave of COVID-19 infections could be on their way, and urged former President Trump to start promoting vaccines to his followers.

Europe “always seems to be a few weeks ahead of us,” said Fauci, adding that this is “absolutely no time to declare victory” just because of a sharp dropoff in cases, causing several states choosing to ease pandemic restrictions.

“They thought they were home free, and they weren’t, and now they are seeing cases going up,” Fauci said, referring to European health officials.

Citing a PBS NewsHour/NPR/Marist poll released last week which revealed about half of US men who identified as Republicans say they don’t plan to get the vaccine, Wallace asked whether Trump should speak directly to his supporters about the vaccine, to which Fauci replied: “I hope he does because the numbers that you gave are so disturbing.” 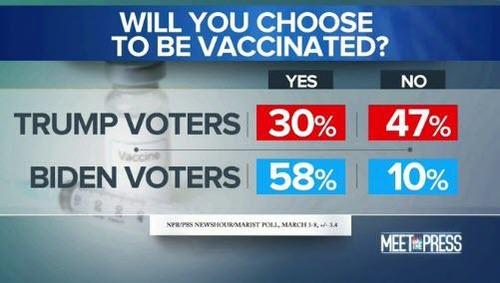 “How such a large proportion of a certain group of people would not want to get vaccinated merely because of political considerations … it makes absolutely no sense,” said Fauci – whose NIH funded gain-of-function bat COVID experiments in Wuhan, China through New York-based nonprofit EcoHealth Alliance.

Fauci added that getting the vaccine is a “no brainer,” before rattling off a list of diseases which had been cured by vaccines (developed over years, not months), such as small pox. “What is the problem here? This is a vaccine that is going to be lifesaving for millions of people,” he added.

He then went on “Meet The Press,” where he parroted his earlier performance regarding Trump and Trump supporters.

WATCH: Dr. Fauci tells #MTP that "it makes absolutely no sense" for vaccine-hesitancy among Trump voters.

Fauci: "What is the problem here? This is a vaccine that is going to be life saving for millions of people. … I just don't understand." pic.twitter.com/6gcsCjBTfv

Hilariously, host Chuck Todd suggested that climate change may contribute to the spread of more viruses:

Meanwhile, Fauci told CNN‘s “State of the Union” that an uptick in cases can be avoided if Americans keep up with vaccinations “without all of a sudden pulling back on public health measures.”

“We will gradually be able to pull them (restrictions) back. And if things go as we planned, just as the president said, by the time we get into the early summer, the Fourth of July weekend, we really will have a considerable degree of normality. But we don’t want to let that escape from our grasp by being too precipitous in pulling back,” Fauci continued, according to The Guardian.

Dr. Anthony Fauci says he’s optimistic that towards the “end of the summer,” everyone who wants a shot will have gotten one thanks to the opening of community vaccine centers, mobile units and getting a lot more people to administer the Covid-19 vaccines. #CNNSOTU pic.twitter.com/RcEajVkfFe