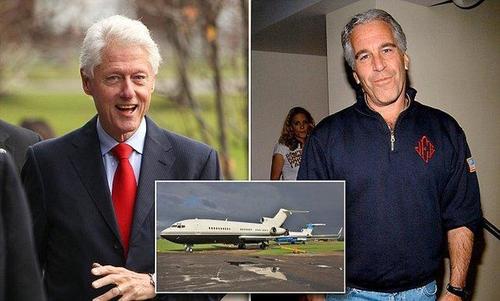 While under oath during the Ghislaine Maxwell trial on Tuesday, pilot Larry Visoski Jr. was asked to describe his experience, to which he said “I certainly remember President Trump, but not many people associated with him,” adding that he also flew Bill Clinton, Kevin Spacey, violinist Itzhak Perlman, former Senator John Glenn and Prince Andrew. He said that while he was tasked with ‘cleaning up’ after one of Clinton’s flights, he ‘never saw any sexual activity’ on the plane.

Trump and Epstein were known to have associated with each other in the 90s as New York City playboys and successful entrepreneurs. As the Daily Mail reports, “It was previously reported that Trump had flown on Epstein’s plane from Palm Beach, where both had homes, to Newark, in 1997.  Epstein is also said to have flown on one of Trump’s private planes.”

Trump is said to have severed his relationship with Epstein and banned him from Mar-a-Lago after the pedophile was reportedly trying to recruit a towel attendant in the early 2000s – prior to his conviction for soliciting child prostitution.

This is not true and isn't news. This came out years ago. The flight was in the late 90s and was a ride from Palm Beach to NYC, not to Epstein Island. Trump later banned Epstein from Mar-a-Lago. https://t.co/GaENydKB8m

According to the Mail, Visoski spent most of Tuesday talking about girls Epstein brought aboard the plane.

“Mr. Epstein brought her to the cockpit. She had piercing power blue eyes,” he said of one alleged victim – to which Maxwell’s attorney Christian Everdell asked “And beyond the striking blue eyes, you have said she had large breasts, right?”

To which Visosky replied that she was a “mature woman.”

‘She didn’t look young. I mean, whatever you decipher is the definition of young. But she was a woman in my category,’ he added.

Maxwell entered the Manhattan courtroom Tuesday morning wearing a cream sweater, black slacks and looked on as Visoski was questioned.

He said Maxwell ‘was the Number 2’ and that ‘Epstein was the big Number 1’ when asked about their relationship.

When asked how many other assistants Epstein had in addition to Maxwell, he replied that there were many, identifying Maxwell’s own assistants.

He specifically named Sarah Kellen – who has been accused of playing a pivotal role in Epstein’s empire: procuring girls, coaching them and acting as a ‘lieutenant’ to Maxwell. -Daily Mail

Visoski also identified parts of Epstein’s 10,000 New Mexico ranch where airplanes were parked – describing how he used to go into the main residence to pick up luggage and help install electronics, a task he said he also performed on Epstein’s private Caribbean island, Little St. James.

He said that Epstein’s relationship with Ghislaine Maxwell was “more personal than business,” but “I wouldn’t characterize it as romantic.”