As was largely expected, The Senate failed to reach the 60 votes necessary to advance a bill creating a bipartisan commission to investigate the Jan. 6 Capitol riots, voting 54-35 as Republicans invoked the first legislative filibuster of the Biden presidency.

Schumer asked Republicans in a speech on Friday, moments before the vote:

After the vote he whined that Republicans had chosen to defend Trump’s election lie.

Sen. Majority Leader Schumer on proposed Jan. 6th commission failing: “This vote has made it official. Donald Trump’s big lie has now fully enveloped the Republican Party. Trump’s big lie is now the defining principle of what was once the party of Lincoln.” pic.twitter.com/i6qV0NnGfX

“I do not believe the additional, extraneous ‘commission’ that Democratic leaders want would uncover crucial new facts or promote healing. Frankly, I do not believe it is even designed to.”

The bill needed 60 votes to advance in the evenly divided Senate, thanks to the chamber’s longstanding filibuster rule.

That means 10 Republicans would have had to vote with all 50 Democrats to allow the bill to proceed. 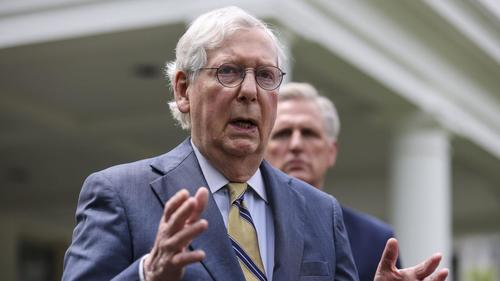 Former President Trump, who remains the most popular figure in the GOP, has condemned the proposed commission as “partisan” and demanded investigations into left-wing political violence during racial-justice protests last year.

President Biden made it clear how he feels…

This vote comes as James Bovard warns, via The Mises Institute, that the bogus Jan 6th Commission posed a real threat to freedom.

“Truth will out” is the most popular fairy tale in Washington. Members of Congress are clashing over whether politicians will appoint an “independent” commission to reveal the facts behind the January 6 Capitol ruckus. Proponents are portraying the issue as a simple choice between “truth or Trump.”

Recent history provides no reason to expect a politically controlled process to expose facts that undermine powerful politicians. Congress has long been worse than useless as a fact-finding agency. “Oversight” is a euphemism for stupefying congressional procedures designed to avoid discovering information that might embarrass their allies. A senior House Republican admitted in 2004: “Our party controls the levers of government. We’re not about to go out and look beneath a bunch of rocks to cause heartburn.” Most members of Congress are more likely to grovel before federal agencies than to challenge their power. “How are you so great and how can we help you?” is the usual response when the FBI director testifies, as Guardian columnist Trevor Timm noted in 2016.

There is no reason to presume that a commission investigating January 6 would not be hogtied official stonewalling. Former Senate Intelligence Committee staff director Andy Johnson observed in 2014: “The fog of secrecy made a mockery of oversight” of the CIA torture scandal. The Obama administration did not object even when the CIA illegally spied on a congressional committee to thwart the torture investigation. Both Bush and Obama administration officials repeatedly lied during congressional testimony on war on terror policies but faced no consequences. But everything would be different in this investigation, right?

House Speaker Nancy Pelosi and her team want a congressionally appointed commission in lieu of disclosing what actually happened on January 6. Cameras posted in and around the Capitol recorded fourteen hundred hours of film on January 6, but very little of the evidence has been publicly disclosed. Fourteen news organizations have requested that the Justice Department publicly release key videos on the federal court’s electronic dockets but no such luck. Capitol Police chief lawyer Thomas DiBiase warned that “providing unfettered access to hours of extremely sensitive information to defendants who already have shown a desire to interfere with the democratic process will … [cause that information to be] passed on to those who might wish to attack the Capitol again.” But it is also “interfering with the democratic process” to withhold evidence of actions which have been endlessly demonized by the president, top congressional leaders, and their media allies.

Disclosing the video could settle the question of whether most protestors behaved like violent attackers or gaping tourists. Julie Kelly, writing for American Greatness, recently posted a forty-five-second video clip of protestors after they entered the Capitol that day. Capitol Police officer Keith Robishaw tells a group of protestors:

“We’re not against … you need to show us … no attacking, no assault, remain calm.”

The citizens shown in that clip don’t appear to have been hell-bent on overthrowing the government that day.

The media is touting the fact that Tom Kean and Lee Hamilton, the cochairs of the 9/11 Commission, have endorsed a commission to investigate January 6. But invoking Kean and Hamilton is like relying on the Three Stooges as references for a job application at a pie factory.

Kean and Hamilton issued a joint statement boasting about the 9/11 Commission:

“We put country above party to examine, without bias, the events before, during, and after the attacks…. The January 6th attack on the U.S. Capitol was one of the darkest days in our history. Americans deserve an objective and accurate account of what happened. As we did in the wake of September 11, it is time to set aside partisan politics and come together as Americans in common pursuit of truth and justice.”

The 9/11 Commission “pursued truth and justice” by permitting the White House to edit the final version of their report before it was publicly released. Despite its canonization inside the Beltway, that report would not be admissible in a court of law, because it relied on torture for many of its key assertions. The New York Times’s Philip Shenon, the author of The Commission: The Uncensored History of the 9/11 Investigation, noted that “more than a quarter of the report’s footnotes—441 of some 1,700—referred to detainees who were subjected to the CIA’s ‘enhanced’ interrogation program.” Shenon reported that commission members “forwarded questions to the CIA, whose interrogators posed them on the panel’s behalf. The commission’s report gave no hint that harsh interrogation methods [including waterboarding] were used in gathering information.” The commission’s report was released months after shocking photos from Abu Ghraib and key Justice Department and Pentagon memos leaked out, exposing the Bush administration’s torture regime. Yet, as Shenon noted, “The commission demanded that the CIA carry out new rounds of interrogations in 2004 to get answers to its questions.” The 9/11 Commission became profoundly complicit in the torture at the same time it pretended to objectively judge the Bush record.

The commission report was released in July 2004 at the same time that Bush was exploiting the 9/11 attacks and the Iraq War for his reelection campaign. The commission ignored evidence compiled by a joint House-Senate investigation revealing that Saudi government agents bankrolled multiple Saudi hijackers in the US prior to the attacks (fifteen of the nineteen hijackers were Saudis). But the Bush administration suppressed those twenty-eight pages of that congressional report and they were not released until 2016. Bush embraced Saudi leaders while insisting that Iraqi leader Saddam Hussein was somehow to blame for 9/11. If the 9/11 Commission had quoted the 2002 FBI memo stating that there was “incontrovertible evidence that there is support for these [9/11 hijacker] terrorists within the Saudi Government,” Bush might have been seriously damaged, but 9/11 commissioners chose to serve the White House rather than truth. Kean and Hamilton remain venerated by the media, because their kowtowing buttressed public trust in the political system.

Would an investigation of January 6 be more honest than the investigation of September 11? President Biden and Democratic congressional leaders are vested in the “terrorist attack/Pearl Harbor” narrative that they established within hours of the fracas. Democrats still refer to the protestors murdering a Capitol Police officer long after the belated revelation that he died of natural causes. The New York Times noted that that advocates of a January 6 commission insist it is “an ethical and practical necessity to fully understand the most violent attack on Congress in two centuries.” Tell that to the Puerto Rican nationalists who shot up Congress in 1954 or to Congressman Steve Scalise and two other Capitol employees who were shot by a Democratic Party zealot in 2017. If such “facts” are the baseline for accuracy, then citizens can start scoffing long before a commission issues a final report.

The biggest illusion behind the push for a January 6 commission is that there is a political constituency in Washington for truth. But that hasn’t been the case for decades. As French essayist Paul Valery warned long ago, “At every step, politics and freedom of mind exclude each other.”

In the same way that it took almost fifteen years for some key facts about the 9/11 attacks to be revealed, it may be months or years until key damning revelations about the Capitol clash are extracted from federal agencies or private individuals and groups. Creating a pseudoindependent commission is more likely to codify a deceptive but politically profitable storyline than to expose facts that undercut powerful Washingtonians or government agencies.

A façade of political “truth” can be more dangerous than no disclosure at all. Biden and congressional Democrats are seeking to turbocharge their push for a new domestic terrorism law to permit widespread federal crackdowns on their opponents. Any rigged commission would likely pour gasoline on a fire that could singe far more American rights and liberties.