The suspect in the Monday afternoon Boulder, Colorado supermarket shooting which left 10 dead is 21-year-old Ahmad Al-Issa from Arvada, Colorado.

So expect this not to be classified as terrorism, and the motive to remain unclear for some time.

But it also appears that he was a very big consumer of legacy media propaganda. Seems they may have helped radicalize this fellow. pic.twitter.com/J2Pn6fPP2E

BREAKING: The suspect in the #Boulder, Colo. mass shooting where 10 were murdered has been identified as Ahmad al-Issa. He was first described as a white male. His social media, which is now deleted, show he was a religious Muslim who posted frequently about "Islamophobia." pic.twitter.com/Y6RWNK0nZ7

Al-Issa has been charged with 10 counts of murder after he opened fire at the King Soopers grocery store in Boulder using a semi-automatic rifle. The victims’ ages range from 20 to 65.

He was shot in the leg and was in the hospital as of Tuesday morning.

The corporate media dropped that mass shooting story faster than you can say Ahmad Al-Issa.

It’s unclear how former President Trump motivated Al-Issa to carry out this attack, but we’re sure Rachel Maddow and CNN will fill in the blanks.

Did something change overnight? pic.twitter.com/1p1RqecVKu

Now that the Boulder shooter, Ahmad Al-Issa, is known to be a Middle Eastern Muslim male, the MSM will of course conclude that he’s a lone wolf with mental issues and they and the FBI will close the case.

And now, a thread of people who got the shooting wrong while playing identity olympics:

What makes this one even more ironic is that the shooter posted to his FB about needing a girlfriend. pic.twitter.com/dptSsk8bzd

And last but lot least… Vice President Kamala Harris’ niece who immediately assumed the suspected mass shooter in Colorado was a White man in part because he was taken into custody alive:

“The Atlanta shooting was not even a week ago. Violent white men are the greatest terrorist threat to our country,”

Which she quickly deleted after discovering the man was ‘not white’ after all, leading to accusations she engaged in racial profiling. 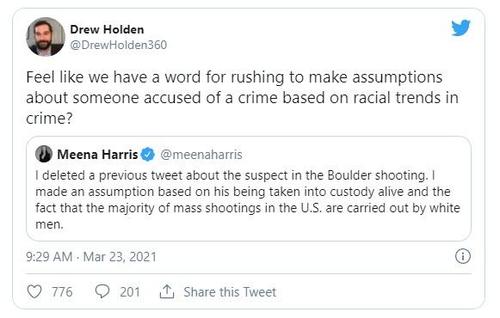 The death toll is now up to 10 people, including a police officer.

“I thought I was going to die,” said meat department employee Alex Arellano, 35, who heard a series of gunshots and witnessed people running toward a nearby exit.

The deceased officer has been identified as 51-year-old Eric Talley, who joined the department in 2010 according to the New York Times.

Dean Schiller, who posted a live video from the scene shortly after the shooting began, said he heard about a dozen shots and saw three people who appeared to be wounded — two in the parking lot and one inside the supermarket.

As officers secured the building, more than a dozen people were led out of the supermarket, a King Soopers in a residential area a couple of miles south of the campus of the University of Colorado. The grocery store usually draws a mix of families and college students. -NYT

In what is being billed as the second major mass shooting in the US since the country’s COVID-plagued economy started to reopen in earnest, six people – including a police officer – were killed inside a Colorado grocery store on Monday afternoon. 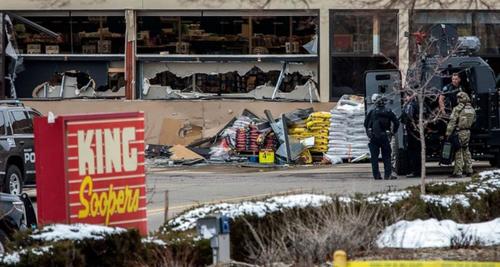 Speaking during a press briefing held just minutes after SWAT police confronted another armed suspect inside an apartment near a high school in Boulder, police confirmed details from the earlier shooting, including the fact that a cop had been killed by the shooter, who was taken into custody.

Video of SWAT officers confronting the second suspect, reportedly named Thomas Hanger, is already circulating on social media. People nearby were warned to shelter in place.

SWAT Teams Are now Arriving Inplace And Now surrounded with Gun Pointed Up Where the 2nd Armed individual inside is located he on 17th street near a high school.

A police officer is among those killed in a shooting at a Colorado supermarket, according to multiple reports. pic.twitter.com/rrCoyMglPm

Monday’s attack took place outside a King Soopers grocery store in Boulder. In addition to the shooter, a second person of interest, who was injured, was taken into custody at the scene, according to Boulder Police Department Commander Kerry Yamaguchi.

Officers A law enforcement source told ABC News officers were responding to a report of someone being shot in the parking lot, and when they arrived at the scene, the suspect opened fire on them using a long gun. Back up in the form of other agencies, including the SWAT team, quickly arrived. ABC News also confirmed that the death toll is at six. Officers are waiting until family members have been notified to release a final death toll, along with names for the victims.

“Without that quick response, we don’t know if there would have been more loss of life,” Yamaguchi said.

The commander and Boulder District Attorney Michael Michael Dougherty said at the news conference that they will be releasing more information on the deceased victims, including the exact number of victims soon, as they are still notifying families.

Video from the attack, including one shot showing the suspected shooter being taken into custody, have been circulating online.

Watch the full evening press briefing from the Boulder police below:

The shooting notably follows roughly one week after another shooting in Georgia directed at three massage parlors and spa, where 8 victims, including Asian women who worked at the spas, were killed. That attack prompted the media to declare that mass killings, which had disappeared from the headlines during the pandemic, have returned in the US.