I admit, I received the card late. While it was tweeted out at 4:26 p.m. Eastern on turkey day, I was busy doing literally anything but paying attention to the official Twitter account of the national BLM organization. I figured I’d done enough performative self-flagellation for one edition of “colonizer Christmas,” as one MSNBC host called it last year.

And if I hadn’t self-flagellated, there were plenty of people willing to do the job for me. MSNBC had upped their game this year, linking the holiday with “genocide” and “white supremacy.” The head of D.C. Public Schools had given me a multitude of tips to “decolonize” my Thanksgiving, as well. What more did I need to call off dinner and instead spend my Thursday wringing the privilege out of my hands like a woke Lady Macbeth?

You are eating dry turkey and overcooked stuffing on stolen land. pic.twitter.com/1Ob1RgBkvp

You could also find out what “ancestral homeland you’re currently occupying” by visiting a website. I’ve apparently commandeered land from the Munsee Lenape, the Piscataway and the Nacotchtank at different points in my life. My apologies.

However, the mere mention of Black Lives Matter and land reminded me of a bit of hypocrisy I was thankful for this year, if just for the entertainment value. If you need a bit of memory-jogging, take a gander at the organization’s Twitter bio: 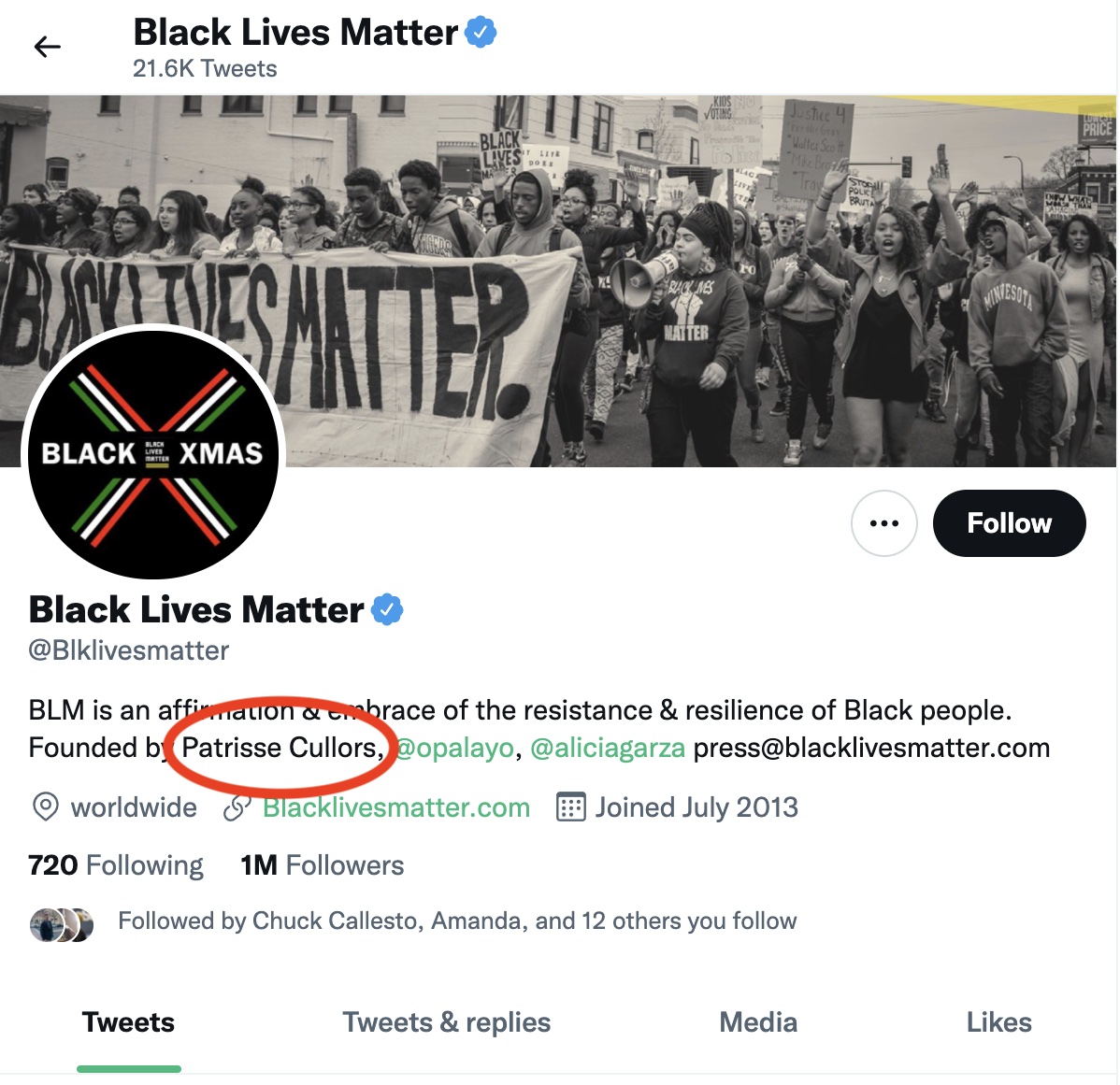 I’m not sure whether Black Lives Matter co-founder Patrisse Cullors — who once described herself and other BLM co-founders as “trained Marxists” — was eating dry turkey this year, but she definitely had several slices of (particularly expensive) stolen land to call her own this Thanksgiving.

Cullors, you may recall, got herself into a bit of a scrape earlier this year when it emerged she’d accumulated extensive real estate holdings, including a $1.4 million mansion in California.

At the time the news of her $3.2 million property portfolio broke in April, she was at the helm of the Black Lives Matter Global Network Foundation, which she had spent nearly six years running. She would leave the organization in May, although she insisted it wasn’t due to the controversy.

I’m all for capitalism, as are my fellow writers here at The Western Journal. The problems with Cullors’ real-estate buys were that a) she isn’t a big fan of capitalism and b) it looked to all the world as if she’d cashed in on the BLM brand, which isn’t great PR for the movement.

On the first point, consider Cullors’ infamous remarks that the founders of the Black Lives Matter movement, including herself, were “trained Marxists:”

“We actually do have an ideological frame…Myself and Alicia are particularly trained organizers, we are trained Marxists. We are super versed on ideological theories…” pic.twitter.com/Mb5kAQybab

“We actually do have an ideological frame,” Cullors said in an exchange several years ago. “Myself and Alicia [Garza] are particularly trained organizers, we are trained Marxists. We are super versed on ideological theories.”

I’m not sure what a “trained Marxist” is, but she seems to have learned the lessons of communism well: As long as you’re the vanguard of the movement, the spoils are good.

After her purchase of a home in Topanga Canyon, California — an overwhelmingly white, well-heeled enclave in the Santa Monica Mountains — her portfolio became an issue and Cullors felt the need to hit back at the haters and losers.

“I think that is a critique that is wanting, and I say that because the way that I live my life is in direct support to black people, including my black family members, first and foremost,” Cullors told former CNN contributor Marc Lamont Hill in an interview.

There was the customary clap-back to conservative media during the interview, too.

“Organizers should get paid for the work that they do,” she told Hill. “The fact that the right-wing media is trying to create hysteria around my spending is frankly racist and sexist.”

Topanga Canyon, by the way? It was “stolen” from the Chumash, Fernandeño Tataviam, Kizh and Tongva indigenous tribes, according to the website Black Lives Matter mentioned in their tweet. There was nary a public peep about this — or, for that matter, any criticism — from the central BLM organization when Cullors was buying up property, however.

Oh, and as a hilarious coda to property-gate, it was reported in July that Cullors had installed $35,000 in walls and fencing around her California home. It may have been pilfered from the Native Americans, but she’s sure going to protect it like it’s hers.

It isn’t that Black Lives Matter is responsible for Cullors — at least not anymore, since she’s removed herself from the movement. However, by juxtaposing their tweet and her circumstances, one can begin to appreciate the fatuousness of this argument: Almost every individual or organization that has a big enough platform to hiss at us about living on “stolen land” owns or rents a nicer piece of it than you do and hasn’t the slightest intention of giving it up.