According to the White House readout of Biden’s Saturday call to Israeli Prime Minister Benjamin Netanyahu, the US president “reaffirmed his strong support for Israel’s right to defend itself against rocket attacks from Hamas and other terrorist groups in Gaza,” while condemning the “indiscriminate attacks” coming from the Gaza Strip.

NEW: Biden spoke to Israeli Prime Minister Benjamin Netanyahu and raised concerns about civilian casualties in Gaza and the bombing of the building that housed AP and other media offices.https://t.co/Siva3uENZa

He merely “raised concerns” about the “safety and security of journalists” – and glaringly absent was any specific mention in the call readout of the intentional targeting of the media building which was hit by a reported six airstrikes earlier in the day, causing it to be flattened.

According to Axios in the call with Netanyahu Biden stopped short of an outright condemnation of the attack, but merely “raised concerns about civilian casualties in Gaza and the bombing of the building that housed AP and other media offices, according to Israeli officials.”The opening section from the White House statement on the call is as follows:

The President spoke today with Israeli Prime Minister Netanyahu. The President reaffirmed his strong support for Israel’s right to defend itself against rocket attacks from Hamas and other terrorist groups in Gaza. He condemned these indiscriminate attacks against towns and cities across Israel. The President updated the Prime Minister on high-level U.S. engagement with regional partners on this issue and discussed ongoing diplomatic efforts. The President noted that this current period of conflict has tragically claimed the lives of Israeli and Palestinian civilians, including children. He raised concerns about the safety and security of journalists and reinforced the need to ensure their protection.

Statement from @AP President and CEO Gary Pruitt on the Israeli attack against our bureau in Gaza:

"The world will know less about what is happening in Gaza because of what happened today."https://t.co/CqoDxogAJ3

And further, Abbas’s spokesperson, Nabil Abu Rudeineh, was quoted in a statement: “The silence by the Biden administration about what Israel is doing and the claim it is self defense led to massacres in Gaza and the West Bank. We ask the U.S. to take action because it is the only party in the world who can stop Israeli aggression.”

Meanwhile, more and more protests are popping up across Europe – and some in the United States – expressing solidarity with Palestinians. “Protesters gathered in London, Berlin, Madrid and Paris as the worst violence in years raged between Israel and militants in Gaza,” AFP and others observed.

Thousands of protesters in London and Madrid marched in support of Palestinians on Saturday as the worst violence in years raged between Israel and militants in Gazahttps://t.co/syzUFfODAc

The death toll continues to climb into the night Saturday, with regional media counting at least 145 deaths in Gaza from the airstrikes.

In Israel, at least eleven have been killed by the continuing onslaught of Hamas and Palestinian Islamic Jihad rocket fire. Amid increased international condemnation for the appalling civilian death toll and especially high number of children killed and wounded, Netanyahu’s office released a statement placing blame squarely on Hamas for the casualties…

After the reported death of a family of 10 in an Israeli strike in Gaza this morning, eight of them children, the prime minister’s Arab-language spokesman blames Hamas, Channel 12 reports.

“Hamas bears full blame for the deaths of civilians in Gaza,” he says in a statement. “It sought this escalation and started it when it attacked Jerusalem. It intentionally buried its rocket launchers and weapons caches and posts in the center of residential areas and this is a war crime. It attacks our citizens to kill as many of them as possible and that is another war crime.”

Death toll from ongoing Israeli bombardment on besieged Gaza climbs to 145, including 41 children and 23 women, while US repeats support for Tel Aviv https://t.co/FETPmVuIQY

In the US, many are taking increasing notice of the apparent complete lack of any US plan or diplomatic intervention toward a ceasefire.

Once again, Netanyahu's govt is slaughtering Palestinian Arabs in Gaza for political reasons to avoid a 5th election, and to impede his pending prosecution. Once again, Biden/Pelosi show no compassion to the mounting Palestinian civilian fatalities, using U.S. weapons and aid.-R

For now it seems the Biden White House is merely content to express “concerns” as the region burns.

So far the Biden administration has stopped short of condemning the Israeli airstrikes on the Gaza offices of US-based Associated Press and other international media outlets, which flattened the 12-story Al-Jalaa tower, resulting in widespread outrage from journalists and media rights organizations across the globe.

This also as the death toll continues to soar amid unrelenting airstrikes – also as Hamas rockets continue to fly toward Israel – at over 140 Gazans killed since Monday.

Al Jazeera's office in Gaza destroyed by an Israeli airstrike. The building also housed residential apartments and the AP bureau. This is the 6th consecutive day Israel has been bombing Gaza. The Gaza death toll is at 140, including 39 children. pic.twitter.com/2rNm9eMIaG

The White House has said it communicated its “concerns” to Israel over the safety of journalists after IDF airstrikes obliterated the 12-story office building that housed international media headquarters in Gaza, most notably the AP and Al Jazeera…

“We have communicated directly to the Israelis that ensuring the safety and security of journalists and independent media is a paramount responsibility,” White House press secretary Psaki wrote.

We have communicated directly to the Israelis that ensuring the safety and security of journalists and independent media is a paramount responsibility.

AP CEO Gary Pruitt previously said in a statement: “We are shocked and horrified that the Israeli military would target and destroy the building housing AP’s bureau and other news organizations in Gaza. They have long known the location of our bureau and knew journalists were there. We received a warning that the building would be hit.”

Israel has targeted yet another large office and residential tower in the Gaza Strip, but this time its warplanes have destroyed the 12-story building housing the media offices of the U.S.-based Associated Press and Qatar-based broadcaster Al Jazeera, the AP itself as well as Reuters eyewitnesses confirm.

The outlets have said that Israel issued advanced warning of the airstrikes of up to one hour before the attack on Al-Jalaa tower. Representatives with the AP and the building owner had reportedly pleaded with IDF officials to give more time to enable a safe evacuation and also to take out crucial media equipment.

Oh my god. The building where al Jazeera’s office is housed has just been taken down by Israeli airstrikes. There was a warning and evacuated. It houses offices and private homes. I can’t believe it. pic.twitter.com/Q4luRYk9H9

However, eyewitnesses say they were not given extra time, but merely made it out with whatever they had in hand and with their own lives.

The building can be seen essentially collapsing in its own footprint, the same way that three prior residential apartment buildings did during days past. “The building was hit approximately six times before collapsing in plumes of black smoke, which engulfed the entire neighborhood,” international press reports noted.

The moment Israel bombed Al-Jalaa tower in Gaza housing international media outlets including Al Jazeera and AP. Reports and media personnel were not even allowed time to grab their equipment before evacuating the building #GazaUnderAttack #Palestine pic.twitter.com/jR2oMDyr68

“The strike on the high-rise came nearly an hour after the military ordered people to evacuate the 12-story building, which also housed Al-Jazeera, other offices and residential apartments. The strike brought down the entire structure, which collapsed in a gigantic cloud of dust,” AP writes.

“There was no immediate explanation for why it was attacked,” AP adds.

The devastating attack brought swift condemnation by various international media organizations and advocates, with a number of prominent journalists expressing their shock, saying they “can’t believe” the media building was so blatantly targeted by Israel’s military.

AP president Gary Pruitt issued a statement saying “we are shocked and horrified” at the “incredibly disturbing” attack wherein “we narrowly avoided a terrible loss of life.” 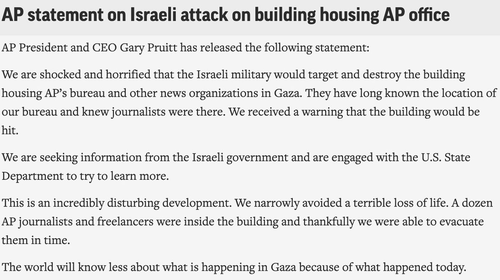 WATCH: The owner of al-Jalaa tower pleads with an Israeli officer on live TV to let journalists collect their gear before he bombs it.

“Journalists who worked there had been reporting on the Israeli attacks on Gaza,” Al Jazeera said in a social media statement. “Targeting journalists is a war crime.”

An Israeli airstrike destroyed the Al Jazeera office in Gaza. The Israeli military warned they would hit the building that houses media organizations including the AP.

Journalists who worked there had been reporting on the Israeli attacks on Gaza. pic.twitter.com/fZVo3TFEoO